This holiday home in the Valverde region of northern Italy features deep square windows, bare concrete interiors and a roof that rises up towards steeply pointed corners.

House R is located in the village of Casa D'Agosto and was designed by Monza-based 35a Studio for a Milanese couple who wanted a place to escape from the city.

The village is surrounded by the rolling hills, woods and farmland of the Valverde municipality, which has just 315 inhabitants and is located around 20 kilometres from the city of Pavia.

The compact 120-square-metre house was built on a gently sloping plot and precisely occupies the footprint of an old barn that was demolished to make way for the new structure.

The building's angular form was created by rotating the roof's ridge 45 degrees so each wall slopes up towards the two highest corners, creating space for mezzanine sleeping areas in opposite corners .

"This holiday home is conceived as an open space on two floors, articulated in a single double-height volume," explained architect Andrea Carmignola.

"Characteristics of the house are its lofts and the 45-degree rotation of the traditional roof cover, which results in the creation of four identical, stereometric and trapezoidal sections."

Reinforced concrete was used to construct the geometric volume, which is perched on a flat piece of ground that opens onto a gravelled yard.

The choice of material ensured additional structural elements are not required, which frees up the interior and also helped to reduce costs.

The house's elevations are rendered in a coarse, heat-reflective grey plaster that forms rough-textured and homogenous surfaces.

A low-cost roofing material typically used for industrial sheds complements the tone of the render and completes the exterior in a way that Carmignola suggested "follows and confirms the brutalist language of the whole work".

Each facade incorporates a series of square openings that are optimally positioned to provide views of the surrounding hills.

The large wood-framed windows ensure plenty of daylight reaches the interior. Some of them can also be opened to allow natural ventilation to cool the spaces.

Inside the house, the concrete structure is left exposed to complement the exterior, while the concrete floor is polished to help reflect light around the rooms.

Solid timber elements including the kitchen units, bathroom door and window frames introduce some warmth and texture to the pared-back spaces.

The open-plan ground floor contains a double-height lounge space, with a dining area positioned beneath a mezzanine next to the kitchen. A small bathroom beside the lounge is floored with green cement tiles.

The kitchen is flanked by sliding glass doors that open out onto the courtyard area. Its built-in cabinets are fronted with treated-maple doors and topped with a concrete work surface.

A reinforced-concrete staircase is squeezed into one corner between the exterior wall and the box containing the bathroom.

The stairs ascend to an open loft level containing a pair of bedrooms positioned on opposite corners of the building. The rooms overlook the living space and offer views of the landscape through windows set into the concrete surfaces. 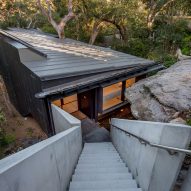