The UK's Design Council has weighed in to the debate about the declining number of students taking creative subjects, describing the situation as "not sustainable for design businesses or the UK economy".

The body said it would lobby politicians from both main parties at their autumn conferences about the importance of educating a new generation of design talent.

"We will be asking MPs to recognise design's current contribution to the economy, we'll press for design to be back in the curriculum to maintain our global status and we'll emphasise the need to act now for the future of the economy," the council said.

Students taking design and technology fall by more than half

The call comes amid rising alarm at the drop in students studying art and design at school.

"In 2017, just under 166,000 students took design and technology subjects, less than half the numbers recorded in 2003," said the Design Council, a charity that advocates the importance of design and advises government.

"This is not sustainable for design businesses or the UK economy, which is dependent on design skills."

Many observers have linked the fall in students studying creative subjects to the introduction of the English Baccalaureate (EBacc), which forces schools to teach academic subjects, potentially marginalising the arts.

The council said that design was the key to "long-term, sustainable growth" but warned that the UK risked falling behind other countries. It pointed out that design is now taught in schools in Denmark, while Estonia has launched a national plan for design and China is switching its emphasis away from "Made in China" to "Designed in China."

"The UK is home to, and has exported across the world, great architecture, product design and industrial design which shapes our everyday life," it said.

"However, we have to face up to dawning reality that there are significant challenges for UK design. From Brexit to skills shortages, from a male workforce to concentration in the southeast." 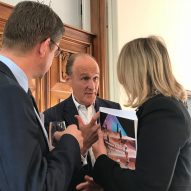 Last week a report by the Education Policy Institute found that the number of students taking arts subjects had fallen to the lowest level in a decade, and was expected to fall further.

However last month TV executive Peter Bazalgette, who conducted an independent review of the creative industries for the government, said creative jobs were viewed as "worse than drug dealing or prostitution" and that young people did not need to study creative subjects in order to work in the sector.

"You don't need to have a creative industries degree to work in the creative industries," Bazalgette told Dezeen. "If you analyse the people in this room [at the launch of the report], the majority of them would have studied other things. What you need is a desire to create things."

Dezeen's Brexit Design Manifesto, published last year, called for design to be championed in schools in order to inspire future generations of designers.