A concrete-framed gymnasium in China, a seemingly endless atrium in South Africa and a flag-covered facade in Singapore all feature among the images vying to be named architecture photograph of the year.

There are 20 photographs recognised in the Arcaid Images Architectural Photography Awards 2017.

The photographer with the most entries on the list is Shanghai-based Terrence Zhang. His three shortlisted photographs are a view of a museum by Japanese architect Kengo Kuma and two shots of the new gymnasium at Tianjin University, by Chinese architect Li Xinggang.

The list also includes a shot of Zaha Hadid's vertiginous Messner Mountain Museum in Italy, an image depicting a lighthouse at Burning Man festival in the Nevada desert, and a view of a chapel with an undulating roof near Cape Town.

Several vibrantly coloured photographs feature too, ranging from a pastel-hued apartment block in Hong Kong to a looping museum in Denmark.

"The winning images not only captured the aesthetics of different architecture and space, but also went beyond recording the images by telling stories about the meaningful built environments," said Chen.

All 20 images will be exhibited at the World Architecture Festival in Berlin next month, during which the winner will be announced. A selection of the shortlisted entries will also feature in an exhibition at Sto Werkstatt, London, in 2018.

Sense of place: Museum of the Pop Culture (formerly known as the EMP Museum), Seattle, USA, by Frank Gehry, photographed by Conchi Martínez

Buildings in use: Gymnasium of the New Campus of Tianjin University, China, by Atelier Li Xinggang, photographed by Terrence Zhang

Buildings in use: Selegie House, Singapore, by the Housing and Development Board, photographed by Siyuan Ma 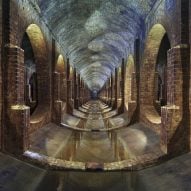