Reclaimed metal panels and wood from railroad trestles were used to create an urban infill dwelling conceived by students in a design-build programme at the University of Kansas.

The home, called 1330 Brook Street, is located in a working-class neighbourhood in the city of Lawrence. It offers convenient access to a cultural district, bike trails and public transit, along with a recreation centre and a park.

The 1,300-square-foot (121-square-metre) dwelling was created by Studio 804, a design-build programme and nonprofit organisation affiliated with the architecture school at the University of Kansas.

"This house is the latest example of Studio 804's mission to create sustainable housing in established but marginal neighbourhoods," said the team. "It was designed to be clearly contemporary while still fitting into its working-class surroundings of small, unassuming homes."

Rectangular in plan, the home is wrapped in insulated metal panels that were salvaged from another construction project in town. The grey panels were planned for a tennis centre, but were rejected due to an issue with the paint, even though they were perfectly functional.

The panels played a key role in the home's design. The team notes that it began to see a parallel between its efforts and those of the Lustron Corporation, which created prefabricated homes for US veterans returning from the second world war. From 1948 to 1950, the company built around 2,500 low-cost, durable homes featuring steel framing and enamel-coated steel panels.

"We wanted our new house to share the spirit of the Lustron design, as it serves as a model for how self-sustaining, low-maintenance houses can be built for everyone in the future as resource management becomes increasingly necessary," said Studio 804.

A signature feature of the home is a steel screen that lines the southern elevation, along with part of the front facade. The screen shades a walkway, along with the home's glass walls, in turn reducing energy costs. The screen is connected to roof overhangs with soffits sheathed in reclaimed cedar boards, which formerly were used for railroad bridge trestles.

Situated on the south side of the home, behind the screen, is a small "outdoor room" that leads to the front door. Occupants step into an open-plan living, cooking and dining area. Beyond the public area are three bedrooms and ample built-in storage. The interior is designed to adapt to an owner's needs.

"Being a speculative project, we wanted to assure that the small house was comprised of flexible spaces that give the owner control over the use and layout of rooms," the team said. "The kitchen is the only permanent part of the plan; otherwise, all of the spaces can be used in multiple ways."

The home features eco-friendly materials, water-saving plumbing fixtures and LED lighting. On the roof, 16 solar panels provide up to 4.8 kilowatt-hours of power and are expected to meet the home's electricity needs.

The dwelling sits atop an earthen mound that was created by the former property owners as a preventative measure, as the parcel sits on a floodplain for a creek. The property had long been vacant, as it can be difficult to get loans to construct a home in a flood-prone area.

"The previous owner had built up the property grade with compacted earth to create build-able ground above the floodplain," said the team. "It sat empty for a long time as an odd looking, weed-covered mound of dirt, but Studio 804 saw an opportunity."

The organisation, which specialises in developing brownfield sites, is accustomed to dealing with difficult hurdles. One of its earlier buildings was constructed atop a landfill, while another was built on a site with buried gas tanks.

"Studio 804 has always been willing to build on brownfield and undesirable infill sites in urban neighbourhoods," the team said. "A vacant lot with a seemingly permanent for sale sign does not reflect well on the health and safety of a neighbourhood and can curb property values and nearby development."

Led by architect Dan Rockhill, the nonprofit studio produces one building each year, which is designed and built with help from architecture graduate students at the University of Kansas. Earlier projects include a Passivhaus-certified home clad in yellow cedar and topped with a gabled roof. 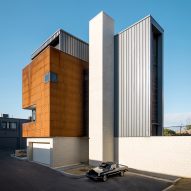