Instead of a typical paper CV, graduate designer Andy Morris has created a Lego Minifigure in his own likeness to send out to potential employers.

Morris, 34, recently completed an interior design degree at the University of South Wales, and is now looking for a full-time design role. He decided to create an unconventional CV to help him stand in a competitive jobs market.

He designed a Lego character to look like himself, complete with a laptop and a tiny paper CV in its hands. He then created custom packaging for the toy, which gives a brief overview of the designer and his background.

"Everything in life should be fun, even applying for jobs," Morris told Dezeen, "and while conventional CVs are great for conveying past accomplishments, they're limited on what personality, creativity and innovation you can inject into them."

"With my approach, I can hopefully demonstrate the above," he said. "Plus, who doesn't want to receive some Lego through the post, and hire the person with such a novel outlook!"

He hopes his non-traditional approach will help to set him apart from his contemporaries, as someone with a wide variety of experience, but will also give potential employers all the information they need to consider him for an interview.

The technique has proven successful in the past – for instance, young job applicant Étienne Duval attracted the attention of architect Bjarke Ingels by creating an animated rap that made a case for why BIG should hire him.

Morris said he has only just started to send out the CVs, but has already had an interview offer from Cardiff-based ad agency S3.

"I've been invited for an interview at S3 in their ball pit, literally," he said, showing off a Tweet he had received.

Lego Minifigures are among the most recognisable pieces of the Danish brand's famous toy construction system. They are sold in the likeness of hundreds of famous characters and provide the characters in Lego movies.

According to reports, Lego's executives also use Minifigures as business cards, although names and details are printed directly onto each character, rather than on packaging.

Other uses for the toys include holders for securing laptop and smartphone cables to the side of a desk – a technique promoted by mouldable synthetic rubber brand Sugru. 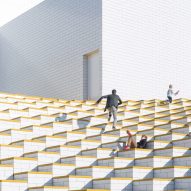