Architecture studio LT2A has added a brick extension to a school near Lille, featuring an entrance sheltered by an anodised-aluminium canopy, and circular windows that provide glimpses of courtyard gardens.

Located southwest of the city in the suburb of Loos, the old school is set among large blocks of social housing that were erected in the 1970s.

The main focus for Brussels-based LT2A was establishing a new entrance that enhances the school's presence and connection with the neighbourhood, while retaining necessary levels of privacy.

The school's original layout placed classrooms in rows, on either side of a wide central corridor that was described by the architects as being like the nave of a church.

The extension creates a pair of new brick-clad rooms, which extend the building forward to meet a pathway leading across the estate.

"Our proposal was to start from the qualities of the existing, anchoring the new to its context in a clearer way," the studio explained.

"In the continuity of the nave, a new entrance is created together with a new facade, which is meant to become the new image of the school itself."

The two new rooms feature rooflines that follow the pitch of the existing building's roof, but are terminated short of the ridge so an open entrance courtyard is created in the gap between.

A projecting canopy clad in gold-hued anodised metal panels extends over the secure entry gate to create a sheltered waiting area for parents.

The entrance courtyard is aligned with the communal corridor and provides a view straight through to the opposite end of the building.

The elevations facing the pathway extend all the way to the edges of the plot. They are formed of pale, slender bricks that lend the walls a textured finish and a reassuringly robust presence.

Apart from the entrance gate, the only openings in the walls are mesh-covered portholes and perforations created by the spacing between bricks.

"The facade creates a filter between the public space and the activities happening inside the school, allowing pedestrians to get a glimpse of the inner garden but still protecting the children's activities inside," added the architects.

The newly created rooms on either side of the entrance are lined internally with corrugated metal. They incorporate glazed sliding doors that open onto the outdoor play areas.

The project also involved upgrading the landscaped areas surrounding the building, to create gardens that preserve the existing trees and introduce an alternative side entrance. 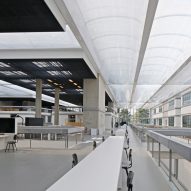 Photography is by Gilles Ribero.