Aitor Throup delved into his 12-year archive when developing the outfits for Wayne McGregor's latest performance, Autobiography, which are designed to function as modular clothing.

Throup, a multidisciplinary designer whose work sits across the fields of art and fashion, was asked by the choreographer to create "clothes, not costumes" for the contemporary ballet.

His response was to create outfits that reference his full back catalogue, in the same way that McGregor references his own life in the performance.

"As an artist, when you collaborate with someone, you try to become them and channel their message," Throup told Dezeen.

Named Autobiography, the performance explores McGregor's own body as an "archive". Through research with cognitive experts and scientists, the choreographer had his own individual genome – or genetic makeup – sequenced.

These sequences were then fed into a computer algorithm, which is used to organise the 23 different sections that make up the whole production.

Each night, a different sequence determines what combination the dancers will perform the acts in. This means that no two performances will be the same.

Throup was brought on board to design the costumes after McGregor visited his G-Star RAW presentation in Paris earlier this year.

The designer had noticed similarities between himself and the choreographer. Both have been fascinated by the body's use as a tool throughout their careers.

The concept of "autobiography" also resonated with Throup, and he began his research process by looking back on his studio's 12-year archive to create a series of "design archetypes".

"Wayne was really interested in it being clothes, not costumes," Throup said. "I knew instantly that they should give the dancers a system that allows interpretation – so that you're seeing the same thing, but in a lot of different ways."

"To reflect his process of going into his past, we tried to replicate this idea of memory and fragments," he added. "We went into our archive and we selected four pieces that could create a kind of wardrobe: a pair of shorts, a T-shirt, a tunic and a jacket."

Each of these four pieces is made from a super-lightweight mesh, more commonly used in the lingerie industry.

A monochrome colour palette was used – three items are black, and one is white to convey a "sense of hope".

They also offer different ways of attaching. The T-shirt can fasten onto the waistband of the shorts to create a voluminous silhouette, and the pieces can be layered up to represent the idea of memory.

"They're also a representation of how Wayne dresses," Throup said. "It made sense both aesthetically and conceptually."

"But we didn't know how the pieces were going to behave with the dancers, and what we found out is that the clothes bring in another layer to the performance, as the volumes trail with movement."

Aitor Throup is the latest designer to work alongside McGregor, who also enlisted the help of long-term collaborator Lucy Carter for the performance's lighting and artist Ben Cullen-Williams for the set.

The choreographer, whose studio celebrates its 25th anniversary next year, has previously worked alongside the likes of John Pawson, Gareth Pugh, Conrad Shawcross and Rain Room creator Random International. 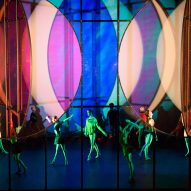 Last year, he worked with Olafur Eliasson on the set design for his Tree of Codes ballet, which saw the Icelandic artist use a combination of mirrors and coloured screens to create different abstract scenes.

Autobiography is on show at Sadler's Wells in London until 7 October 2017.

Photography is by AT Studio, Andrej Uspenski and Richard Davies.