Dezeen has teamed up with British lighting brand Anglepoise to give six readers the chance to win a special-edition Type 75 Mini desk lamp, in a colour combination designed by Paul Smith.

This competition is now closed. Congratulations to the winners, which are Judith MacInnes from Wakefield, UK; Emily Slough from Rugeley, UK; Ali Harries from Carmarthen, UK; Troels Heiredal from Brooklyn, USA; and Ben Jones and Winnie Cauley, both from London, UK.

Smith's previous collaborations with Anglepoise have all been exclusive colour editions – but this the first time he has played with the scale of the lamps.

"Following the success of our previous collaborations with Anglepoise, I thought it would be nice to add two extremes: the mini and the maxi!" said Smith.

"The giant one is pretty extraordinary and in a big space looks sensational, whilst the mini is perfect for studies or students working in smaller spaces."

Six readers will each win a desk lamp, in one of three special-edition colourways.

Colours that have been added to the lamp's aluminium arms include bright pink, light blue, olive green, yellow, light pink, red and navy and forest green.

"Ultimately all successful collaborations are about people, and Anglepoise and Paul Smith are well matched," he said. "We have products that perform and last. Paul's are very similar – and they're especially welcome as partners with their wit and ingenuity."

The first Anglepoise lamp was designed in 1932 by automotive engineer George Carwardine, after he invented a new type of spring that maintains its position after being moved in any direction. The Type 75 is based on a 1970s version of an Anglepoise lamps from the 1950s.

As well as Paul Smith, the brand has also collaborated with fashion designer Margaret Howell, who created a collection of Type 75 lamps in a range of exclusive colours.

Six readers will each win a Type 75 Mini desk lamp, which is also available to purchase from the Anglepoise website for £145. The competition is only open to readers from the UK, Europe and the US. 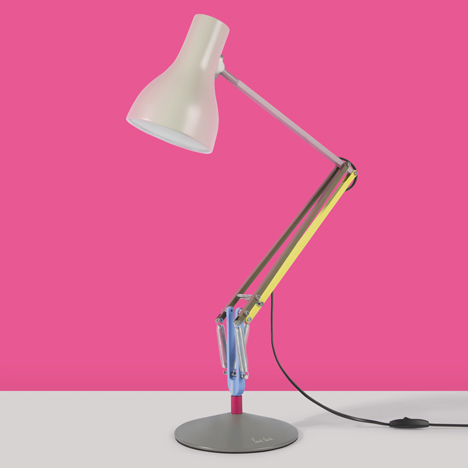