A filigree-patterned supertall tower under construction in Downtown Manhattan is set become the area's second tallest skyscraper behind One World Trade Center.

The 45 Broad Street residential skyscraper is designed by New York architecture firm CetraRuddy and planned to reach 1,115 feet (340 metres) once it tops out.

It will overtake all of the high rises in the Financial District cluster at the tip of the island, except the One World Trade Center office tower further north, which measures 1,776 feet (541 metres) tall.

However, the BIG-designed Two World Trade Center – set to rise 1,340 feet (410 metres) – could overtake 45 Broad Street once work resumes on the stalled project.

CetraRuddy's skyscraper will occupy a vacant lot close to the New York Stock Exchange, which was slated for a Nobu Hotel backed by actor Robert De Niro in 2008, but sold to developer Madison Equities in 2014.

The groundbreaking ceremony for the project took place in April 2017, but construction finally got fully underway at the end of September 2017.

Elements of the design reference the surrounding art deco structures, including thin bronze lines that will stretch up the slender glass facades.

The building's 64 storeys will house 150 condominiums, as well as offices and amenity spaces on the lower levels.

The tower's height puts it in the supertall category – assigned to buildings measuring between 980 feet (300 metres) and 2,000 feet (600 metres). Several supertalls are planned or underway in New York, including Central Park Tower, set to become the world's tallest residential building, and One Vanderbilt rising beside Grand Central Station.

Photography is by CetraRuddy. 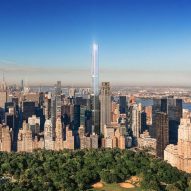