American architect Richard Meier has completed an arching single-span bridge across a river in the Italian city of Alessandria, which provides lanes for traffic and pedestrians separated by a central void.

The 185-metre-long Cittadella Bridge connecting the city in northwest Italy with the 18th-century citadel on the opposite bank of the Tanaro River is the first pedestrian and vehicular bridge completed by Richard Meier & Partners, the American firm known for its pared-back architectural approach.

The pre-cast concrete and painted-steel structure replaces a previous bridge that was affected by a major flood in 1994, when water reached as high as the roadway.

The new tied-arch crossing is raised above the flood plain and is intended to provide a public space where pedestrians can linger as they transition between the city and the historic fortress.

"More than 20 years after the initial commission to design a new bridge between the city of Alessandria and the old citadel, I am extremely pleased to have completed this new modern link between the past and the future of the city," said Pritzker Prize laureate, Meier.

"We hope that this new structure will contribute to the civic life of the local community and to the urban revitalisation around the site, the 18th-century citadel and Piazza Gobetti."

The previous bridge was often heavily congested with traffic and difficult for pedestrians to cross, so the design of the new crossing separates people and traffic into two parallel routes.

The bridge's 32.5-metre-high arch leans away from the road and incorporates tension cables from which both routes are suspended, resulting in a single span anchored in concrete abutments at either end.

The side accommodating the road bows gently to the north, with the curve of the pedestrian walkway to the south helping to achieve the necessary counterbalance.

The form and the use of white concrete and painted steel gives the structure a bold presence that is visible from many parts of the city.

"As in many of our buildings, this project is a composition of volumes and forms," said Meier, "and at dawn and dusk, and with the change of the seasons light will filter through the structure, providing for particularly animated light conditions."

The pedestrianised side of the bridge is planned as a public plaza, with porfido stone pavers referencing the traditional material palette of the city's streetscape and squares.

Acoustic abatement walls help to reduce traffic noise along this route, which provides views along the river and is wide enough to accommodate many visitors as well as cyclists.

Meier's studio worked alongside local firm Dante O Benini & Partners Architects to complete the project, which Benini claimed provides a new public space at zero cost due to its structural role as the vehicular bridge's counterweight.

"The real success of the project has not just been bringing people back to the river, but in making the pedestrian part of the bridge the most coveted square in the city, and the most extraordinary place for social gathering for the citizens of Alessandria," Benini added.

Richard Meier runs his New York and Los Angeles-based practice with six partners. Collectively they have completed over 130 projects across America, Europe and Asia, including a Bauhaus-inspired white tower in Tel Aviv.

Meier is regarded as one of the last practicing 20th-century modernists and has also applied his characteristically bright-white minimalist style to a contemporary interpretation of an English manor in the Oxfordshire countryside, and an office building in Rio de Janeiro featuring horizontal louvres and vertical gardens. 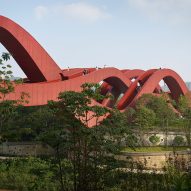