Foster + Partners has unveiled plans for an office that will become Budapest's tallest building – which readers are comparing to France's most hated skyscraper in this week's comments update.

Building a pest: readers are protesting against a tower designed by Foster + Partners for the Hungarian capital, saying it will block views of a famous hill and become a blemish on the skyline.

"Mr Foster, thanks for ruining a UNESCO World Heritage historical landscape with your phallus-shaped building," said JaxonPollock. "Budapest will get its very own Tour Montparnasse."

"I feel this is the wrong building in the wrong place and is disrespectful to the fabric of Budapest," agreed Clichy. "I would have no objection to the scheme elsewhere in the city, where it did not impact on the skyline."

Some readers had other concerns. "Something vaguely Hadidian about this," wrote Melon Design, possibly referencing the building's undulating form. "What's nice about it? It looks very banal and dated," said R2D2.

But regular commenter HeywoodFloyd defended the development, saying the city needs to grow:

What do you think of the design? Have your say in our comments section ›

Blade runner: readers are praising a decision by the Museo de Lourve for cancelling a sculpture it describes as "sexually explicit", despite protests from the artist.

"Hooray for Louvre president Jean-Luc Martinez for showing the art world that taste is still paramount in Paris," wrote Joe.

Readers tried to be tactful about its form, which resembles a man penetrating a four-legged animal. "It's almost subtle enough to look as if they didn't notice it until they erected it (pun intended)," wrote HeywoodFloyd. "Maybe smaller scale would have been less ludicrous?"

"I thought it was an android dreaming of electric sheep, but what do I know?" said Wally-Jumblatt.

But not everyone was offended:

Neave it: readers are debating the state of social housing in the UK after Royal Gold Medal winner Neave Brown claimed that the poor shouldn't have to live in poorly equipped high-rise blocks.

Stevenx47 said the lack of affordable housing was a design problem. "I think it is because of Neave Brown's schemes that politicians have decided not to build public housing," he wrote. "The general public do not like what he and other architects designed."

"I think [Neave Brown] is exactly correct," wrote Jan. "But it appears that massive high-rises will have to take over and, at the least, surround the towns and cities where the work is and, at the worst, become the norm for every hamlet in the state."

h30 agreed with Brown's remarks on how slab blocks foster poverty. "Isolation and segregation are exactly what leads to stagnation and decline, thus propelling the condition and worsening the environment for everyone."

One reader changed his mind on the matter after reading the interview:

Seasick: readers say this family home in Brooklyn made from stacked shipping containers is an interesting take on the architectural trend.

"This is a fresh approach to shipping container architecture, which I felt was getting slightly repetitive," wrote Moho.

"LOT-EK's work with containers is a real curiosity," said TFO. "It's not cheap by any stretch, which is what the general public can tend to think."

"Pretty intense," wrote Chris. "Gotta hand it to these guys for sticking with a theme."

One reader praised the house for taking a risk: 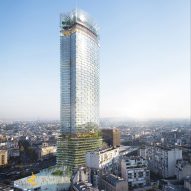