New York studio LOT-EK has built a family home in Brooklyn by stacking shipping containers, and cutting them at an angle to create terraces stepped down its back.

Carroll House was designed for a couple in the restaurant business with two young children and two cats. They wanted a unique home to fill a plot they found at the end of a street in Williamsburg, so asked shipping container specialists LOT-EK to take on the challenge.

The Manhattan-based firm founded by Italian duo Ada Tolla and Giuseppe Lignano has experience building with the disused metal containers around the world, and already completed the overhaul of a carriage house in Brooklyn using the modular steel volumes.

However this was the studio's first opportunity to construct an entire house in the city.

"For New York, to be able to build a ground-up, single-family house is very special," said Tolla during the Van Alen Institute's fall party, which was held at the home last week. "We were excited to change the typical typology of the townhouse, forming a relationship between indoor and outdoor."

The house occupies the full footprint of a 25- by 100-foot site, the typical size for a Brooklyn lot. Less standard is its position at the end of the row, meaning both a short and long facade are fully exposed to the street.

"Generally, the townhouse only has the short side on the street," Tolla said. "So the idea of making a single-family home that had all the frontage was really a challenge, and the thing we were working against."

LOT-EK stacked the brown containers three wide and two long, then three high at the front and two high at the back, on top of a concrete base.

A decision was then made to slice off sections from the lower back of the pile, cut at an angle downwards from front to back. Rather than discarding the excess pieces, the team flipped them over and placed them on top of the higher stack.

With the addition of extra metal pieces, they created a continuous slope down the building, which partially conceals a series of stepped external platforms.

"When we thought about cutting the stack, we realised that we created terraces at every level, and a lot of privacy along the 100 feet," said Tolla.

Small portions were also removed from the bottom of the structures front, allowing access to a below-grade entrance down a concrete set of stairs and sloped driveway.

Upon entering, a staircase leads up to the living spaces. On each storey, sections of the steel container walls have been removed to open up the spaces, while some portions are retained for privacy and structural support.

The dark brown of the metal is paired with warm-coloured reclaimed wood panels on the floors and ceilings.

Above the garage and storage spaces in the basement is an open kitchen and dining area at the back, leading out onto the lower terraces.

A perpendicular staircase and a chunky brick fireplace in the centre of the building separates the eating area from a sitting room on the other side. The slope at the front of the building is utilised as a stepped seating for watching TV and movies on the opposite wall.

A level up, a library and study space is divided by the stairwell, and opens to another decked terrace. Behind a pair of connected bathrooms, and another staircase to the master suite above, are the children's bedrooms and a spare room.

The main bedroom, washrooms and closets occupy the full upper storey, with floor-to-ceiling glazing stretched across the back. Smaller windows are placed at each level on the front facade, while thin slits down the longer elevation bring additional light into the home.

Building with salvaged shipping containers is nothing new – the upcycled boxes have been used for many years to create anything from staircases and swimming pools, to office complexes and wacky houses.

But LOT-EK has dedicated a large part of its practice to constructing in this way, and sees the Carroll House as proof that an entire home can be built from containers on a tight urban plot.

Photography is by Danny Bright. 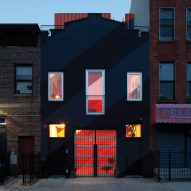