A major new concert venue replacing the Museum of London is to be designed by Diller Scofidio + Renfro, the New York architecture firm behind the acclaimed High Line park.

Diller Scofidio + Renfro is working with British firm Sheppard Robson on the Centre for Music, which will offer a permanent home to London Symphony Orchestra, which is currently based at the nearby Barbican Centre.

The venue will sit on a site in the City of London currently occupied by the Powell & Moya-designed Museum of London – which is to be relocated to a new building by Stanton Williams and Asif Khan at Smithfield market.

The concert hall will be the first UK project by Diller Scofidio + Renfro, which is best known for its transformation of an abandoned elevated railway line in Manhattan into the hugely popular High Line park.

Set up in 1981 by Elizabeth Diller, Ricardo Scofidio, Charles Renfro, the firm is currently working on several major cultural buildings in the US. Its expandable cultural centre, known as The Shed, is underway as part of the Hudson Yards development, as is the firm's US Olympic Museum in Colorado Springs. 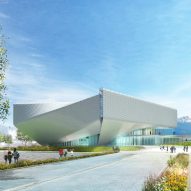 "The new building will meet the needs of artists and audiences today with a keen eye toward the future. It will be sensitive to the inherited character of the Barbican and its vital role in Culture Mile while directly engaging the contemporary urban life of the city," said Diller.

"We aspire to make a hub where people want to spend their time, with or without a ticket," she continued.

"The panel agreed that, of the six excellent submissions, Diller Scofidio + Renfro's visionary ideas offered the exciting potential to create a Centre for Music fit for the future that offers access and engagement for all," said the panel for the competition, which was run by the Barbican, London Symphony Orchestra and Guildhall School of Music & Drama.

"The panel felt Diller Scofidio + Renfro most clearly met the vision and ambition of this project, utilising their experience of creating inspiring new spaces for culture to present a proposal that delivers a world-class concert hall in an outstanding new building, as part of the re-imagination of a key area of the City of London within Culture Mile."

Diller Scofidio + Renfro will now work with Sheppard Robson to develop a concept design by December 2018.

Photography is by Elliott Brown.

Expandable cultural venue The Shed is being built in New York