Danish design collective Superflex has filled the Tate Modern's Turbine Hall with a snaking framework of three-seater swings, which it hopes will encourage social interaction between visitors.

The One Two Three Swing! installation features a bright orange framework that weaves throughout the huge Turbine Hall, and continues to the outside of the building.

It was conceived by Superflex as a three-stage journey exploring apathy, production, and movement – and is arranged across the Hall's sloping entrance, its far-east end, and the bridge on the gallery's first level.

"The work explores the potential of energy generated by social movements, drawing unexpected connections within, between, and beyond institutions, and proposing new uses for urban public space," said the Tate.

At the show's "apathy" stage on the sloping entrance, visitors are encouraged to lie down on a 770-square-metre expanse of carpet in a colour scheme inspired by the UK's currency.

Up above, a gently swinging mirrored pendulum is suspended from the ceiling by a 20-metre cable, which is intended to encourage quiet thought and reflection.

In the show's "production" section at the far end of the hall, three-seater swings are made live on-site. Here, each of the swings is assembled and stored before they are distributed across the sprawling orange frame.

The third and final "movement" stage takes place as visitors interact with the assembled swings around and outside of the Hall.

"The act of resting in contemplation, with the hypnotic pendulum swinging above, is set in contrast to the liberating, collaborative experience of swinging together," explained the Tate Modern.

"Over time the work will evolve as the orange line continues to grow and new swings are added, spreading outside Tate Modern, into the urban landscape of London and potentially beyond into the wider world."

The Danish collective, founded in 1993 by Jakob Fenger, Bjørnstjerne Christiansen and Rasmus Nielsen, hopes that the three-seater swings will instigate group activity and demonstrate the positives of working in collaboration.

"The work invites audiences to combat social apathy through collaborative action, joining together on the count of three," said the Tate.

Running until 2 April 2018, One Two Three Swing! is the third in a series of annual Hyundai-commissioned artworks that have occupied the Turbine Hall’s vast space – but it is the first installation to break beyond the gallery walls.

In 2015 Abraham Cruzvillegas installed a grid of triangular wooden planters filled with soil collected from parks across London; and in 2016 Philippe Parreno's Anywhen installation saw the French avant-garde artist fill the space with fish-shaped helium balloons that floated around a choreography of acoustics, sound lighting and film.

Since the Tate Modern opened in 2000, some of the world's most famous artist's have created installations for the Herzog and de Meuron-designed Turbine Hall including Anish Kapoor, Olafur Eliasson, Carsten Höller and Louise Bourgeois. 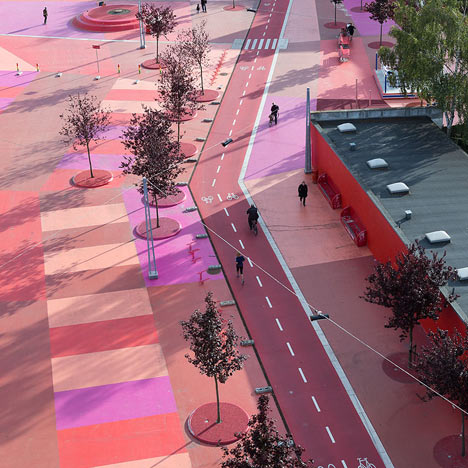 Superkilen by BIG, Topotek1 and Superflex