Can design tackle the really big problems facing the world? Or is design helping to cause these problems? Join Dezeen and Dutch Design Week in Eindhoven on 21 and 22 October, where these questions will be addressed in a series of free discussions.

Created as part of our Good Design for a Bad World collaboration with Dutch Design Week, each of the five talks will involve a high-profile group of speakers and will address a different global crisis.

The discussions will be moderated by Dezeen founder and Dutch Design Week international ambassador Marcus Fairs, and will also be live streamed on Dezeen.

All the talks are free to attend and will take place at the People's Pavilion at KetelHuisplein 1 in the Strijp-S district of Eindhoven.

Climate change is perhaps the biggest threat to mankind. What can designers do to tackle this issue? Or would it be better for them to start exploring ways to protect society from rising sea levels and temperature increases?

The speakers are: Richard van der Lacken, co-founder of design conference What Design Can Do and initiator of the Climate Action Challenge; Lonny van Ryswyck, designer and co-founder of Atelier NL; Babette Porcelijn, industrial designer and author of the book De Verborgen Impact, which gives an insight into the impact people have on the planet, and Annemartine van Kesteren, curator at Museum Boijmans Van Beuningen.

How can design, architecture and urbanism help make life easier for refugees and host communities? Can design help prevent population movements in the first place? Should refugee camps be considered as proper cities rather than transit zones?

Speakers include Kilian Kleinschmidt, former refugee camp manager and founder of humanitarian consultancy Switxboard; Michelle Provoost, co-founder of Crimson Architectural Historians and director at International New Town Institute; and Rene Boer, a critic and master in urban studies with links to social movements in Europe and the Middle East.

Terrorists are turning vans and trucks into weapons and targeting urban spaces. How can we design out terrorism without ruining our cities? And to what extent is urban design making things easy for terrorists?

Speakers include Winy Maas, architect and founder of MVRDV; and Ingo Niermann, German novelist and artist and author of the Solution series, which asks how the problems facing the world can be solved; and Tinus Kanters, project manager at the Dutch Institute for Technology, Safety and Security.

From projects that remove plastic from the oceans to devices that suck smog from the air, designers are trying to tackle pollution. But can these really make a difference? How can these ideas scale up fast enough to tip the balance?

Speakers are Dave Hakkens, industrial designer and creator of the Precious Plastics recycling project; Bernhard Lenger, a designer and founder of the This is Ecocide campaign to raise awareness of environmental destruction; and Eline Strijkers, co-founder of design studio DoepelStrijkers, who believes that design can be an agent for social renewal.

Over the past year widespread discontent has led to the Brexit vote and the election of Donald Trump. Can design address the causes of this discontent? Or did design help cause it in the first place?

Speakers include Ravi Naidoo, founder of the Design Indaba festival in Cape Town, whose aim is to harness design to help Africa become a creative force on the world stage; Rudy van Belkom, who has proposed a new electoral system through his project Het Nieuwe Kiezen; Lennart Booij, art historian, political campaigner and co-founder of campaigning bureau BKB; and Jan Boelen, artistic director, curator of the 4th Istanbul Design Biennial and head of Social Design at Design Academy Eindhoven. 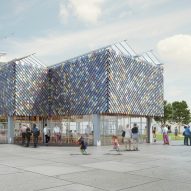