Open House is taking place in Chicago this weekend and we've selected some of the best buildings to snoop around, including a Frank Lloyd Wright-designed house, a pink-hued apartment block, and studios of the city's prominent architects.

Organised by the Chicago Architecture Foundation, this year's Open House Chicago will see 200 of the city's most significant spaces open to the public for the next two days.

Along with offices, residential blocks, places of worship and gardens, this year the annual event accompanies the second Chicago Architecture Biennial. It also falls on the same weekend as Open House New York.

Frank Lloyd Wright, one of the most important architects of the 20th century, completed Robie House in Chicago in 1910. With features such as overhanging flat roofs and the low brickwork the residence is known as the best example of his Prairie Style.

Ribbons of windows with coloured glass wrap the house bringing plenty of daylight inside the residence, where the architect also designed the lighting, rugs, furniture and textiles.

Find out more about Robie House ›

In SOM's studio, models of the practice's most significant projects are displayed on wooden boxes, and walls are covered with pin-ups of recent projects. Visitors can also check out the studio's wind tunnel, which is installed on the building's second floor and used to test wind effects on proposed designs.

The offices of Studio Gang – the firm founded by architect Jeanne Gang – are located within the Polish National Alliance building, a city landmark. Built near the Polish Triangle, it was previously the headquarters of the organisation, which offered financial services to Polish immigrants living in the city.

Studio Gang moved in two years ago after a series of renovations, which saw the interior stripped back to create an open-plan office with roughly exposed ceiling fittings. The studio also built a glazed events pavilion on the building's rooftop, alongside a garden, where it grows an abundance of plants.

Built in 1928, the pink-hued Edgewater Beach Apartments is the last surviving structure of a complex designed by Chicago-based architects Marshall and Fox in the city's Edgeware community. Its reddish exterior is intended to reference the colours of sunset, while the accompanying – but now demolished –
Edgeware Beach Hotel featured yellow hues like sunset.

The building comprises four V-shaped wings that open the apartments up to plenty of daylight, as well as views of the nearby Lake Michigan. Architectural highlights include an indoor terrace and the original beaux-arts swimming pool, which features decorative white screens and golden hand rails.

Designed to provide luxury apartments for the 1893 World's Columbian Exposition, the seven-storey residential building forms one of the earliest examples of high-rise living, as well the Romanesque Revival. After an extensive renovation, it reopened in 2003 as a complex of senior living apartments.

Behind the walls of The Yale there lies an atrium topped with a skylight. Planting is draped from the balconies that wrap the void and offer views between each floor.

The Powahatan is a 22-storey-high art deco residential tower designed by architects Robert DeGolyer and Charles L Morgan – an associate of Frank Lloyd Wright – for Chicago's South Side.

It is named after Chief Powhatan, a Native American Leader who died in the 1600s. References are made to this in mural decorations on the exterior terracotta panels – one of many of the original details that are still intact. Others include ornate bird and flower designs inside the main lobby and the lift, which features burled wood, aluminum panels and etched mirrors.

Two tower blocks are set side by side to make up this apartment complex. Although bearing the same glassy, modernist exterior, the two structures do have a difference – one is 36 storeys high, while the other is 37. Together they house 1,026 residences with impressive views across the city and the park surrounding.

This Open House will mark a rare occasion, as the resident's private garden and bird sanctuary, designed by landscape architect Phil Shipley, will open for the public to explore.

The Brewster Building was designed in the late 1800s by Enoch Hill Turnock for the publisher of American Contractor, who suffered a fatal accident on site before it was completed.

On the exterior of the building – the second built in the romanesque revival style on our list – masonry forms curved corner edges and boxes for apartment windows. Inside, the skylit atrium is filled with cast-iron stairways connected to bridges with glass floors – details that have made the building an attractive setting for films including Child's Play, Running Scared and Hoodlum.

A visit to the North Marine Drive Condomuniums will no doubt focus on the monochrome water feature. Glass and white blocks form a stepped tower with black details that is placed behind a pool with a water spout.

This structure is placed in the courtyard of the residential complex, which was completed in 1939 as part of the art modern movement – a style that emerged out of art deco, and focused on streamlined details. The building features alternating pale and dark stripes to create the long horizontal shapes that the style was renowned for.

Chicago's Bahá'í House of Worship is one of 10 temples of the Bahá'í Faith – the Abrahamic religion started in the 1800s – built across the world, and the oldest of the nine that are still surviving.

A domed volume is set at the top of the building, with two floors stepped below that are punctured by pillars detailed with intricate carvings. Steps lead from the building to a long pool that spills over at one end to form a water fountain. 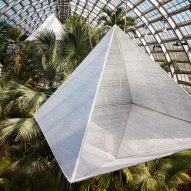 Photography is by Eric Allix Rogers, unless specified otherwise.