Blackberry previously pledged not to make any more hardware – however new Blackberry Mobile devices are instead being introduced by Chinese partner company TCL.

The Blackberry Motion marks a new shift towards primarily touchscreen interfaces, a staple of rivals like Apple and Samsung.

Instead of the plastic QWERTY keyboard typical of Blackberry phones, the Motion features a 5.5-inch HD display.

It also features a 4000mAH battery, giving it a longer life than previous models, and a dust- and water-resistant IP67 rating, which means it will be able to withstand being submerged in fresh water at a depth of one metre for up to 30 minutes.

The BlackBerry Motion was officially unveiled in a low-key fashion at GITEX Technology Week in Dubai a week ago, after pictures were leaked on Twitter by technology blogger Evan Blass.

It received a luke-warm reception from critics. In The Register, Simon Sharwood said it "will move you neither to tears of joy nor sadness", while Tech Radar reviewer Abbas Jaffar Ali said "the design and specs aren't much to get excited about".

The device runs on a Snapdragon 625 SoC processor, comes with 4GB of Ram, 32GB of storage, a fingerprint reader, and 12 and 8MP cameras on the back and front, respectively. It runs on Android 7.1.

The BlackBerry Motion is the second remodelled BlackBerry launch following the release of the KEYone smartphone earlier this year. Unlike the Motion, the KEYone features a keyboard under its touchscreen.

Formerly known as Research in Motion (1982 to 2013), BlackBerry sold its handheld branding rights to TCL in December 2016, following an announcement by the Canadian company earlier that year that it would stop making its own phones, to concentrate on services and software.

It has been reported that the Motion will initially only be available in the UAE and Saudi Arabia and will retail at around $460. Launch dates for other markets are yet to be announced.

The stealth launch came less than a month after the hotly anticipated unveiling of Apple's iPhone 8, which breaks new ground with its augmented-reality technology compatibility and wireless-charging capabilities. 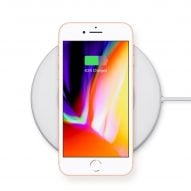