The supertall tower that Zaha Hadid Architects designed for a New York site owned by the Kushner family has been rejected by the project's partner Vornado.

Kushner Companies, owned by the family of Donald Trump's son-in-law Jared Kushner, wants to raze a 1950s office building at 666 Fifth Avenue and replace it with a 1,400-foot-tall (427-metre) luxury residential tower.

But sources told Bloomberg that Vornado Realty Trust, which owns a 49.5 per cent stake in the project, wants to simply refurbish the existing building and keep it as offices.

Vornado chairman and CEO, Steve Roth, is said to have been unenthusiastic about the proposal from the beginning, and unwilling to invest further in the building until its future is secured.

Kushner Companies would therefore have to find new investors for its ambitious project, but renegotiating could result in the company losing control of the building, said the unnamed sources close to Roth. They claim that Vornado wants to renovate the building and lease its spaces at competitive rates to prevent it from losing more money.

However, Kushner Companies said that a decision has not yet been made.

"As equal partners, Vornado and Kushner have been exploring a range of options for the future of 666 Fifth Avenue," said a spokesperson for the company.

"All options are still being assessed, and no decision has been made about which option to pursue. Any implication that an agreed upon path has been reached or that there is contemplation of an outcome that would be to the sole benefit of one party over the other would simply be wrong." 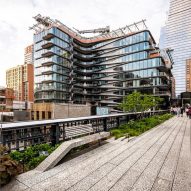 The plans for the ZHA-designed glass skyscraper – housing condos, a hotel and a shopping mall – were unveiled in March 2017, when the project was seeking investment from China's Anbang Insurance Group.

Anbang pulled out of negotiations after a conflict of interest was raised, concerning Jared Kushner's role as a senior advisor to the US president, and marriage to his daughter Ivanka.

Although he resigned from his position as CEO of Kushner Companies after entering the White House in January, and sold his stake in 666 Fifth Avenue to his father, Jared Kushner's new job has caused issues for his family's real estate company. Similarly to Anbang, investors are unwilling to associate with the firm due to its ties to the US government.

The current 666 Fifth Avenue building was designed by New York firm Carson & Lundin, and completed in 1957. It is suffering from low occupancy and is rapidly losing money through loan interest rates, according to Bloomberg.