Spooked readers are wondering if a preserved rotting cottage is a seasonal prank or a serious dwelling in this week's comments update.

"I find it extremely depressing and very unhygienic," said William, while Lela compared it to a movie set and Edi said it induced nausea.

Some commenters even claimed to spot a ghost in one of the images, prompting E Smit to write: "I guess it is nearly Halloween."

But others loved the finished result. "Anytime ancient structures are preserved, my heart soars," wrote Froggy Rabbit. "And, maybe because I am an artist – I adore the contrast."

One reader saw the funny side:

Could you spend a night here? Have your say in our comments section ›

Mad men: Stephen Bayley stuck up for tobacco packaging this week, and warned against the death of branding, in an opinion column that has ruffled feathers.

Several readers pointed out that plain packaging on cigarettes provides a vital purpose – to help prevent disease. "To me the entire argument is a slippery slope – the war is on cancer, not branding," wrote Ballardian.

A user called Dan was more sympathetic. "In addition to what Stephen says, the brand is a personal signature of who produced it. Long live the brand!"

But others protested at the idea of branding being tied to the personal identity of a consumer.

"Why should a brand represent personhood?" asked Bryn. "Brands are there to make money – they don't care about you. They manipulate you into thinking your self worth is dependent on what you consume."

Another reader wrote a stinging takedown of Bayley's argument:

Hail AI: commenters are expressing atheist views after learning about a new religion established by an ex-Google engineer, whose ultimate aim is to create a god with artificial intelligence.

"This sounds like a 'disrupt' startup aimed at making money out of religion," wrote user Stool60. "After all, religion has very loyal followers who give and give, and pass their loyalty down to generations."

For regular commenter Geofbob, the concept made sense. "Man has always created gods. People believed, and still believe in them, and in the accompanying fables, so why not in an AI god?" he wrote.

One commenter started speculating about conspiracies:

Borderline: readers are debating the visual and political impact of installations that Ai Weiwei has erected in New York to protest against Donald Trump's US-Mexico border wall.

"Those are cute little sculptures, but if the article had not said so, I would not have associated them with a border wall," wrote regular commenter Concerned Citizen. "Sculpture should not need subtitles."

"Beautiful pieces, but do they really express a protest?" agreed Josh. "They almost don't express themselves as a fence, because they are so refined. Which is fine."

But it was a comment in support of the wall that amassed the most engagement: 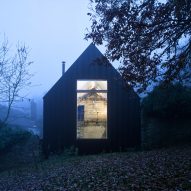