The latest mid-century motor lodge given a new lease of life as a boutique hotel is this property in California, which has been refreshed with a colour palette reminiscent of its former heyday.

Calistoga Motor Lodge and Spa was rejuvenated by US design firm AvroKO, which has worked on hospitality projects including a "micro hotel" in New York City. Located in the town of Calistoga, in California's Napa Valley, the building was constructed in the middle of the 20th century.

This and many similar motels and motor lodges across the USA have recently been updated to become boutique hotels, from Liz Lambert's overhaul of the Austin Motel in Texas, to Studio Tack's renovation projects in Wyoming and upstate New York.

Calistoga Motor Lodge's new interiors have a retro feel, with colours, patterns, furniture and lighting pieces all taken from the 1950s, 1960s and 1970s.

"The interiors, as well as the brand identity, gleaned inspiration from graphic moments one might encounter during mobile adventuring, such as gas stations and truck stops, faux wood panelled vehicles, sports uniforms, etc," said a statement from the hotel, "while much of the guest experience and styling moments feature 'analog' leisure of decades past, such as hula hooping and jump rope."

The lobby is designed to look like part general store and part 1970s living room. Portions of glass-block walls and light-coloured square tiling are paired with teal and burgundy seating, arranged around a fireplace. A marble-topped reception desk is accessorised with brass lighting and simple vases, creating a minimal aesthetic.

While waiting for spa treatments, guests can relax in a room with reddish floor tiles and comfy grey armchairs. Amenities include a co-ed steam room, a room with mint-coloured tiling filled with claw-footed bathtubs, and an outdoor lounge.

"The MoonAcre spa embodies the exploratory spirit of the era with a mash-up between modern quack apothecary and municipal pool from a fictitious Wes Anderson film," said the hotel's statement. "The final touch is an intentional overabundance of cheeky signage and wayfinding."

In the bedrooms, upholstery is coloured in shades of navy and light blue, mustard yellow, and various greens.

An outdoor pool area is surrounded by a terrace peppered with loungers, daybeds and umbrellas. Their blue and white fabrics are echoed with graphics across the walls, intended as "Instagrammable moments".

The property re-opened this week after wild fires led to the evacuation of the area. The fires devastated large parts of the region and killed 42 people. A representative for the hotel said that the team is helping to support recovery efforts in Napa and Sonoma.

AvroKo, based in New York City, has also completed the interiors for the Modern Pantry restaurant in London, and a cafeteria and coffee bar in the new San Francisco headquarters for Dropbox.

Photography is by Aubrie Pick. 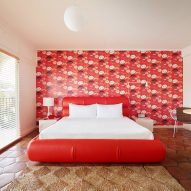