Foster + Partners has designed its "most ambitious" Apple Store for Chicago, with huge glass walls and a slender roof that looks like a scaled-up version of the company's laptop computer.

The Apple Michigan Avenue store is located on the city's river edge beside the North Michigan Avenue – also known as the Magnificent Mile – and in front of the higher-level Pioneer Court, a public plaza.

London firm Foster + Partners placed a pair of granite staircases either side of the store to create a new pathway from the plaza to the river esplanade, while the huge glass walls rise 32 feet (approximately 10 metres) to maintain views from this public space and the water.

The carbon-fibre roof atop is designed to be as slim as possible and supported by four internal pillars to keep the glass walls free.

"Apple Michigan Avenue is about removing boundaries between inside and outside, reviving important urban connections within the city," said Apple's chief designer Jonathan Ive.

"It unites a historic city plaza that had been cut off from the water, giving Chicago a dynamic new arena that flows effortlessly down to the river."

Billed as its "most ambitious" yet, the new store will also function as a social hub and classroom for the community, beginning with the Chicago Series – a month-long course programme that covers a range of areas including building a start-up, photography, artwork and poetry.

"When Apple opened on North Michigan Avenue in 2003, it was our first flagship store, and now we are back in Chicago opening the first in a new generation of Apple's most significant worldwide retail locations," said Apple's senior vice president of retail Angela Ahrendts.

The initiative forms part of the Today at Apple programme of free in-store educational sessions delivered by specialists.

To accommodate this inside the store, an upper level includes tiered seating for the public to relax, while the open-plan lower floor extends from store tables at the back to low-level tables on the river side.

Foster + Partners, headed by architect Norman Foster, has completed a number of projects for the technology giant, including stores in London, Dubai and Singapore. Earlier this year, the firm completed Apple Park, the brand's vast ring-shaped headquarters in Cupertino, California. 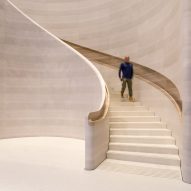