The inaugural Designart festival featured 72 exhibitions and talks across the city and was organised by architects and designers from Tokyo studios including Miru Design and Klein Dytham Architecture.

The event fills the void left by Tokyo Designers Week, which was cancelled this year following a tragic fire last November and which may not now return.

Co-organisers Astrid Klein and Mark Dytham of Klein Dytham Architecture said Designart was set up to address the lack of  design festivities in the Japanese capital.

With Designart, they hope to "put Tokyo on the map" as a destination for the industry.

"The Japanese government is really not very good at supporting design. They always push it over to the private sector," Dytham added.

Kicking off just after this year's Tokyo Fashion Week and just before Tokyo Motor Show, Designart aims to take advantage of visitors to these already established events.

The exhibitions and events in the programme are largely clustered on Aoyama-dori and Omotesando, a crossroads forming the axis to an upmarket shopping and design district, and home to fashion houses and car showrooms.

The set up opposes that of Tokyo Designers Week, which had seen exhibits corralled into an events' tent in Meiji Jingu Gaien, an open area dedicated to sports facilities that will host the Kengo Kuma-designed olympic stadium.

Its high entry and exhibiting costs had made it unrepresentative of Tokyo's design scene, said Klein and Dytham.

"There's only a certain type of of person who can afford that," Dytham told Dezeen.

"It didn't match our expectations," she said.

This year's Tokyo Designers Week was cancelled following the death of a five-year-old boy when an exhibit caught fire last year.

Dytham, who also sits on the board for Tokyo Designers Week, said the event's cancellation was an "atonement" for the accident, and there were no signs it would resume.

Miru Design founder Akio Aoki came up with the idea for Designart festival eight years ago, as a way to support the creative industries following the financial crisis of 2008.

With the Japanese government "gradually" increasing its support for the arts sector in the run up to the Tokyo 2020 Olympics, at the end of 2016 Akio said he thought it was time to make the design week a reality.

He enlisted an interdisciplinary team to help set it up – comprising Klein and Dytham alongside artist Shun Kawakami of Artless, designer Hiroshi Koike of Non-Grid and Img SRC, and artist Okisato Nagata of EXS.

The group hope the event will also become a platform for designers to launch new projects in Tokyo rather than at Milan or New York design week, which Dytham said is taken by designers as a sign that "you've made it".

Swedish trio Claesson Koivisto Rune brought the launch of their Faciem project – a series of prints of building facades – forward from Stockholm Design Week to present it for the first time at the inaugural Designart, and Klein Dytham Architecture launched its own modular furniture series at the event.

Also among exhibitors are established Tokyo-based studios Torafu Architects and Schemata Architects, as well as lesser-known artists and designers.

While some exhibits take advantage of design store showrooms, many occupy fashion shop fronts and foyers along Aoyama-dori and Omotesando, with the Louis Vuitton store displaying pieces from its Objet Nomades collection and French designer Pierre Charpin setting up his work in the lobby of the Japanese fashion house World.

The aim is to build a symbiotic relationship between the design week and fashion retailers, helping to get customers across the threshold, as well as offering affordable space for designers and artists to exhibit.

This crossover between different strains of design and art led to the name Designart. Akio said he hopes the term will take root and have the creative industries recognised collectively by the Japanese government, rather than as separate economic forces.

There was no government funding for Designart, with the co-founders instead stumping up the running costs for this year's event.

But Akio has aspirations for future editions of the annual event. He said the British government's support of London's design scene in the run up to the London 2012 Olympics seemed likely to be a model for the Japanese government as the games approached.

"We always learn from London," he told Dezeen.

The event also aims to replicate the social atmosphere of Milan design week, with after parties dedicated to the crossover between design, fashion and technology held at "the Bar Basso of Tokyo" – the SuperDeluxe nightclub and events space run by Klein and Dytham.

The architects have also made their PechaKucha night part of Designart, an event that sees participants make quick-fire presentations, and which was previously hosted by Tokyo Design Week.

The portrait of Designart's founders is by Taku Kasuya. 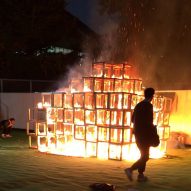 More architecture and design in Tokyo