British architect David Adjaye and Israeli architect Ron Arad have been named the winners of a competition to create the UK's National Holocaust Memorial in a park near the Houses of Parliament in London.

The competition was launched by the UK Holocaust Memorial Foundation to commemorate the six million Jewish people murdered during the Holocaust, and to all other victims of Nazi persecution.

"This unique and immersive memorial is not just for Londoners, but for the whole UK.  It will ensure the horrors of the Holocaust are never forgotten and will stand as a powerful reminder to future generations about the fragility of peace," said Khan.

"The bold and sensitive collaboration between architecture, landscape architecture, art and design from such a multi-faceted and award-winning team truly captured our attention," added Weir.

"But also the seriousness with which the team approached the brief and the responsibility they saw they had to carry the messages from this terrible history on to the generations to come," she continued. "Sir David Adjaye described the core of their concept during the interviews as being 'architecture as emotion'."

David Adjaye and Ron Arad's firms previously collaborated on a not dissimilar design for Canada's National Holocaust Monument, but lost out to a proposal by Daniel Libeskind, which has just completed. 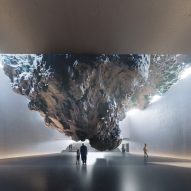