The flat roof of this house in Austin by local firm Mell Lawrence Architects reaches well beyond its walls, shading the glazed top floor from the harsh Texan sun.

Balcones House was built using cast-in-situ concrete, also chosen for its ability to withstand the hot climate. Exterior walls comprise a thinner outer layer and a heavier, structural inner layer, with insulation in between.

From the street, the house resembles a glass pavilion on top of a sturdy concrete base. Hidden from view in the back garden are a pebbled pool area and a detached guest house.

The ground-floor layout is designed as a box-within-a-box, with a central core covered in untreated fir wood housing storage spaces and the vertical circulation.

Upon entering through the front door into an open-plan dining and living area, the timber volume can be seen straight ahead.

"This volume organises the open space, obscuring the media room to the east, where openings to the outside are minimal, creating a more intimate space for watching television and reading, as well as a buffer from the busy street below," said the firm.

With storage and more private spaces located inside the core, main living areas are designed to be more open. Massive sliding glass doors surround the kitchen and living room, opening to the garden and swimming pool.

Upstairs, on the fully-glazed level of the house, is a bedroom and a master suite with a 15-foot-deep (4.5-metre) screened porch. Flooring alternates between soft wood and polished concrete, with ceilings featuring structural fir decking and steel beams.

A small, detached guest house provides additional living space, and accommodates an office and art studio. The concrete unit has a spatial strategy similar to the main house, with a large grey pod centred in the space that houses a fold-out desk, drawers and a pull-out queen bed, while also serving as wall-space for a bathroom behind.

Photography is by Leonid Furmansky. 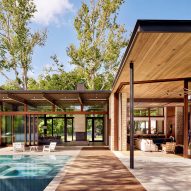