Original brickwork, mahogany panelling and a new guest casita are featured in this 1950s Texas dwelling that has been meticulously renovated by local studio Clayton & Little.

The Balcones Residence was originally designed by Roland Roessner, a University of Texas professor and prominent architect of modern-style homes. The brick dwelling sits adjacent to an historic military base in a leafy Austin neighbourhood.

Perched on a hillside, the dwelling has a distinctive concrete balcony that cantilevers over the front yard, which faces west. A courtyard and swimming pool are found on the south side of the home.

When the clients purchased the two-bedroom house from the original owners, they "delved into all things mid-century modern" and hired local firm Clayton & Little to oversee a sensitive renovation of the 1,773-square-foot (165-square-metre) building.

The architects sought to retain the home's original character while adding square footage, updating finishes and improving energy efficiency. Certain rooms were reconfigured, while others were left intact.

"Roessner designed this modest home with clean lines, simple forms and used humble and affordable materials," the firm said. "Preserving the original character of the site and maintaining the prominence of the historic structure was of most importance."

The entrance to the home was modified. Brick walls were added to form an open-air garden, which establishes a more formal entry sequence.

On the north elevation, the team added a boxy volume that contains an office and utility room. Set back far from the street, the extension was designed to be barely noticeable.

In the family room and living room, clerestory windows were added – a feature that was part of Roessner's original design.

"They had been cut from the project due to cost, so these windows were re-instated during the remodel to realise the original vision and improve daylighting in both areas," the studio said.

The family room also features new mahogany cabinetry, a new hearth and taller pocket doors leading to a screened-in patio. Original decor, such as a Herman Miller sofa and coffee table, were refurbished.

Major changes took place in the kitchen, which had not been overhauled since the home was built. To create a more open public zone, the team removed a unit that served as both a space divider and a structural component. A new steel beam and column were installed to make up for the loss of the load-bearing unit. 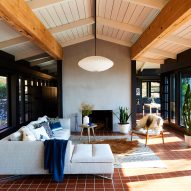 Other new elements in the kitchen include honed-quartzite countertops, white cabinetry and cork flooring. Original features such as wood panelling and a pass-through window between the kitchen and dining room were retained.

In terms of the private zone, the house's two bedrooms were combined to create a single master suite. One side of the room is wrapped in warm mahogany, while the other features a large window that overlooks the courtyard. Special details include air grilles that align with the grain of the wall panelling, and a custom bed frame that accommodates the owners' motorised bed.

Just across the courtyard, the team built a new guesthouse that serves as "a comfortable and private retreat for the owners' children and their growing families". Connected to the main house by a covered walkway, the casita contains two bedrooms, a bathroom and a bar area.

The project entailed a host of changes that are not fully visible to the eye.

To improve the home's energy performance, the team retrofitted the building envelope by installing new insulation and double-glazed windows. Photovoltaic panels were added above the carport and guesthouse.

The home's cantilevering balcony and railing were restored, as was the limestone wall below it. The team also added a notch in a roof eave to make room for a heritage oak tree.

Asbestos was removed, and new flooring was installed – cork in dry areas and tile in wet zones. New LED fixtures that match original lighting appliances were installed throughout the residence.

The team took great care to protect and reuse original elements. In the case of bricks, those that were removed were cleaned and incorporated into other parts of the home.

"Extensive work went into protecting, salvaging and reusing as much of the original material as possible," the studio said.

Other restored mid-century homes in the US include a low-slung dwelling in New York's Hudson Valley that was updated by GRT Architects, and the overhaul of a plywood-clad home in Silicon Valley that was built by visionary developer Joseph Eichler after the second world war.

Photography is by Nick Simonite.