To commemorate this year's Day of the Dead, designer Fabio Novembre has updated his Jolly Roger armchair by covering it in a traditional sugar-skull pattern.

Originally launched by Italian brand Gufram in 2013, Novembre's Jolly Roger chair appears minimal from the front, but its back is designed to resemble a human skull.

The skull on the new edition – launched to coincide with today's Day of the Dead, or Dia de Los Muertos – is hand-painted to include bones and teeth, as well as traditional Mexican sugar-skull patterns such as lace and flowers.

Inside, the chair features a map of the world, just like the original Jolly Roger.

"For two years we have been discussing with Fabio Novembre on how to work on a special edition [of the chair], and our thoughts would constantly go to the Mexican interpretation of the sugar skull during Dia de Los Muertos," Gufram told Dezeen.

"For us, people working in design and with aesthetics, the iconography of Dia de Los Muertos is stunning," the brand continued.

"Just like in the Italian Carnival, where all the creativity is based a few traditional masks, Dia de Los Muertos focuses on many different interpretations of the same iconography: skulls and skeletons."

Dia de Los Muertos is a traditional Mexican festival, which takes place each year at the beginning of November as a celebration of the deceased. It is believed that, on this day, the dead are awakened to participate in the celebrations with their loved ones.

"The tradition of decorating skulls and skeletons comes from the idea that the dead would be insulted by mourning or sadness, thus the festivity celebrates the lives of the deceased with food, drink, parties, and activities the dead enjoyed in life," said Gufram.

The brand has launched Novembre's limited-edition of the Jolly Roger chair in two colours: black and white.

Novembre has previously recreated body parts to form furniture for other brands besides Gufram. The designer created huge faces for sitting in for Driade, and designed a pair of chairs that look like kneeling naked figures for Casamania. 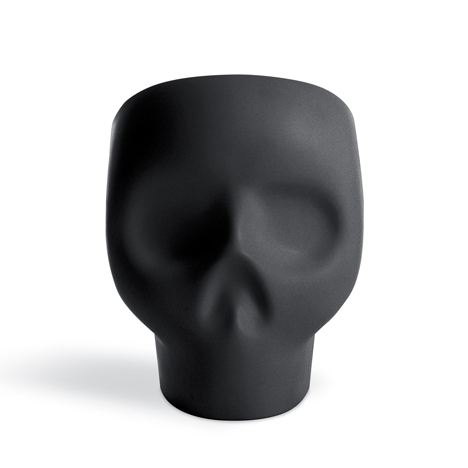