Cabrero called for new zoning laws to be enacted before developers rush in to replace the approximately 38 buildings that collapsed in the city, and over 1,800 that were structurally compromised and need to be demolished.

Many of these are located in the historic central neighbourhoods of Condesa and Roma, which are characterised by colonial- and art deco-style buildings, and home to both older citizens and young professionals.

"The challenge is going to be that those areas don't lose their integrity, and that they don't become a paradise for developers," Cabrero told journalists last month during Design Week Mexico, which had to be pushed back a week following the quake.

"There's not a real policy at the moment for what's going to happen."

The 7.1-magnitude quake struck on 19 September 2017 with an epicentre in the state of Puebla, killing 361 people, with 220 of those in Mexico City. Now that the dust has settled, attention is quickly turning to rebuilding the damaged areas.

Cabrero and fellow architects in the city want to work with the National Institute of Fine Arts – the organisation responsible for the city's architecture – to zone areas for preservation, and prevent out-of-character development in these places.

"We want to make a program for Zoning for Identity Protection for the City," he said. "What we want to do is create a map, for which buildings should be preserved and restructured, block by block."

Building codes in the Mexican capital were altered and made stricter following a magnitude 8.0 earthquake that killed over 30,000, exactly 27 years before the recent seismic event. But the city still has very fuzzy zoning laws, which dictate land use – commercial, residential – but cover little to do with building size or style.

Towers could still be considered in newer areas

Another concern is that high-rises in areas of less historic significance will be curbed due to fear of collapse in future earthquakes, causing the urban development of Greater Mexico City – home to a growing population of 21.3 million – to continue sprawling outwards.

"Everyone's afraid of tall buildings, so people are going to say that no buildings should go more that five floors," he said. "But nothing happened to the tall buildings, it was the old buildings that weren't repaired after the earthquake of 1985, and on the other side, poorly built [modern] buildings."

"The kind of earthquake that we had was low impact, so it affected those low-level buildings instead of high-rises," Cabrero added.

Earthquake brought the people of Mexico City together

The architect also spoke about the way citizens came together in the aftermath of the quake.

"I think the earthquake, even though it was a terrible thing, did a nice thing for the city," Cabrero said. "For one thing, there was no looting like in 1985. And the capacity of people to organise themselves was impressive.

"They took total control of all the [rubble], which was very impressive. Everyone was helping and did something, and most of the people did not post [on social media] in order to respect the victims.

"People went to the streets and organised traffic," he continued. "People were cooking in the streets. People moved into their neighbours'. For the workers and volunteers, people just opened their homes for people to take showers and naps. It was very surprising."

The ninth edition of the annual Design Week Mexico took place from 11 to 15 October 2017, involving events, exhibitions and installations across the Mexican capital. The city is also gearing up to be World Design Capital 2018, with a programme focussed on socially responsible design. 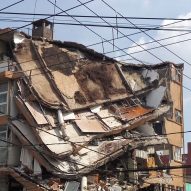