This week's Pinterest roundup shines a light on interiors that feature unusual lamps or pendants to set the mood, from a chandelier made from tea bags to a sculptural light previously used for squid fishing.

A sculptural light made from metal pipes and lightbulbs previously used on squid fishing boats complements the industrial-style interiors of this Aesop skincare store in Kyoto.

Find out more about Aesop Kawaramachi ›

For this organic tea bar in Sydney, Matt Woods incorporated several whimsical features, including a chandelier made from tea bags, which hangs above the tile-clad serving counter.

Find out more about The Rabbit Hole ›

London-based McLaren Excell kept the interiors minimal when overhauling a two-storey laundry facility in Shepherds Bush. A black, bar-shaped pendant light that hangs above the kitchen island dramatically contrasts with the white walls.

Find out more about Rylett Crescent ›

A cloud-shaped light contrasts with blue and green tones inside this apartment in a Kiev high-rise, which has been furnished in a Scandinavian style.

Find out more about Kiev apartment ›

Find out more about Holiday Apartment ›

London architects Alma-nac transformed a Victorian end-terrace house into a hotel for the record label, filling each room with coloured neon lights in the shape of lightning bolts and suspending clear glass lightbulbs from red cords.

This renovated Paris apartment features wooden furniture and a sculptural light conceived as a "geometric cloud" – constructed from 76 frosted glass triangles, which are held together by hinges and rivets to allow the structure to be moulded into different configurations.

Find out more about Studio Nuctacle ›

For the renovation of a cafe inside Paris' Musée du Louvre, French designer Mathieu Lehanneur added contemporary acrylic light fixtures that cast a diffused pink glow over their historical surrounds.

Find out more about Cafe Mollien ›

This spacious home in the Hamptons has vaulted ceilings and low beams that mimic a traditional barn or loft. A skylight that stretches the length of the space ushers in daylight, while a contemporary lighting fixture found above the marble bar adds extra brightness.

Find out more about Louver House ›

Lampshades with woollen shades and long knitted cables have been draped around the minimal interiors of this refurbished 20th-century apartment in Berlin.

Find out more about Berlin apartment › 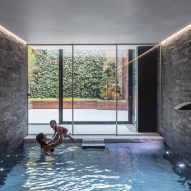 10 homes that make impressive use of their basements