Secret spaces beneath trapdoors, underground pools and subterranean yoga rooms feature in our latest Pinterest roundup, which focuses on homes with basements that defy the gloomy stereotype.

Guarnieri Architects added an underground extension to this Victorian terraced house, making room for a glazed box containing a swimming pool, hot tub and steam room. The addition provides swimmers with views out onto the garden through huge windows at the rear.

Find out more about Victorian Remix ›

This underground space was once used as a slurry pit before being left abandoned for over 70 years. Anne Rolland transformed the space into a secret room, only accessible via a mechanical trapdoor and a set of wooden stairs.

Find out more about Studio Apartment ›

This family home in London's Bayswater is full of secret rooms hidden behind folding and sliding doors. Amin Taha Architects created a dramatic open-plan living space in the basement by topping the walls with concrete soffit.

Find out more about Caroline Place ›

Spanish architect Raúl Sánchez converted the entire basement of this residential house in Barcelona into a separate apartment. A curved pine partition divides the rooms within the 55-square-metre apartment to allow for privacy without wasting space.

Find out more about Apartment Tibbaut ›

Argentinean studio Adamo-Faiden repurposed the basement in this Buenos Aires townhouse to create a quiet yoga room. The underground space is lit from above by a strip of skylights for added ambience.

Find out more about Venturini House ›

During the overhaul of this west London house, Theis and Khan extended the basement to include a number of leisure rooms – including a swimming pool, cinema room and gym. Rather than creating light spaces, the studio chose dark colours and grey tiling to make the swimming pool feel like a mountain cave.

According to British rapper Tinie Tempah, this basement is where he spends most of his time. Originally designed for Alexander McQueen, Tempah asked for the room to be redesigned to his own personal taste, adding concrete walls and a pinball machine for a "New York-warehouse apartment feel."

This residence by Los Angeles-based Walker Workshop is nestled into the Southern Californian hillside. Walnut wood floors line the lower ground storeys, which accommodate a place to store wine, an auditorium, a gymnasium and lounge.

The designers of this south London house wanted its basement to rebuke dark and dingy stereotypes. The space conveys a sense of openness with high ceilings, large windows and a pre-cast concrete staircase – allowing daylight to filter down to the lower level.

Find out more about House 13 ›

Attempting to make their London home blend into the background and to preserve the surrounding area, architects Deborah Saunt and David Hills used underground rooms. The lower level is kept light and bright thanks to a wide rectangular lightwell.

Find out more about Covert House › 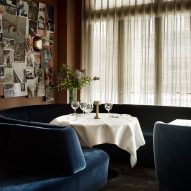 10 opulent interiors that spurn minimalism for rich colours and textures