New York-based architect Gauld said that Isozaki's extension to the art museum in 2001 sparked a wave of big-name architects working in the city, like OMA, Herzog and de Meuron, and Sou Fujimoto.

"We were the first well-known architects to do a project here, and now everybody has," Gauld told Dezeen in an exclusive interview. "Miami at the time was very provincial. Boy it has changed since then."

The interview took place last week at reopening of the Bass Museum, following a renovation he completed in consultation with 86-year-old Isozaki – the 1986 recipient of the Royal Gold Medal.

Gauld was working for the Japanese architect when he entered a competition in 1993 to extend and renovate the museum on Collins Avenue, which occupied an art deco-style building that architect Russell Pancoast completed in 1935.

Gauld said that Izosaki pushed for Miami Beach to develop into the cultural hub that it is today.

"[Izosaki] told the jury to escape their destiny to be provincialised," he said. "It's become a cultural district here."

Gauld attributes the biggest change in the area to the annual contemporary art fair Art Basel Miami Beach, which was introduced in 2002 to accompany sister events in Basel, Switzerland, and was later joined by an edition in Hong Kong.

He said the event offered the city a cultural gravitas that has given rise to a host of adventurous projects by internationally renowned architects. Among those are the Faena Forum cultural centre by Rem Koolhaas' firm OMA and Herzog and de Meuron's Pérez Art Museum Miami across the bay, along with the many starchitect-designed residential towers across the area.

"It's because of Art Basel – that really changed the focus to international," said Gauld. "Miami seriously held the baton for art."

Gauld also said it has fostered the appetite of local residents for art and culture. He was brought on to redesign the interiors of the Bass Museum to accommodate more gallery space for contemporary art and a growing numbers of visitors. 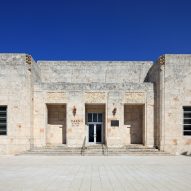 Read on for an edited version of our interview with David Gauld:

Eleanor Gibson: Can you give a brief background to the project?

David Gauld: I worked on the project with Isozaki 20 years ago. We won the competition in 1993 and I was his employee at the time. I was very involved in the whole project from the earliest stage to the competition, so when the museum decided to do a reconfiguration and expansion, they came to me.

I took in everything that they wanted to do and made a preliminary plan, and went to Isozaki. He was totally fine with all the changes. I've discovered since that there is a difference in attitude between east and west. Even in their art in Japan, they prize things that have been modified; are old, broken, repaired. They prize those more than the original. We're much more preservation minded.

I wanted to continue his legacy as much as possible and show respect. I tried to use mostly design vocabulary that had already been established here, either in the historical building or in Isozaki's addition, rather than try to introduce something new.

Eleanor Gibson: What's interesting about the project is that you has the opportunity to look back on what you had done and make changes. Miami has also seen huge changes, can you tell me a bit about that?

David Gauld: Absolutely. When we first did the competition in 1993, Isozaki couldn't come for the final presentation when we were selected. I gave the presentation and I read comments from him.

He gave the jury a challenge. He told the jury to escape their destiny to be provincialised, because Miami at the time was very provincial. Boy it has changed since then. We were the first well-known architects to do a project here, and now everybody has.

He also added something to the programme what he called third generation of the museum in the park, which is like different pavilions designed in collaboration with artists to contain specific artworks. He was proposing this third generation museum that hasn't been built but is in some way realised every year with Art Basel. They build temporary buildings on the waterfront, so in some ways it was actually quite visionary.

The situation has gotten so nice here. They finally tore down the library that was built in the park with its back towards the Bass Museum, which was so nasty, they redesigned the park, and they built the new library by [Robert AM] Stern and Arquitectonica's ballet. So it's become a cultural district here.

Eleanor Gibson: Why do you think that is?

David Gauld: It's because of Art Basel – that really changed the focus to international. Miami seriously held the baton for art. When the museum came to me about this project, which was about four or five years ago, the context was so different to when we originally built it – things needed to be different. We reconfigured almost everything.

Eleanor Gibson: Who was that to cater to?

David Gauld: The museum's mission had definitely changed. When it first opened in the 1960s it had the Bass collection, tapestries, paintings, sculptures.

Because of Art Basel there were changes – they had a new director, a new board, and people were just more interested in contemporary art – and so the focus of the museum changed. To the point where now the historic collection is in one gallery as a kind of archive, where people can learn about art history.

Eleanor Gibson: What was the main aim of the project for you?

David Gauld: To serve two masters, one being Isozaki, who I have so much respect for, and I wanted to do something that would be appropriate and continue his legacy here. I also had to do what the museum wanted and they had very specific requirements that we really hashed out in the programming phase.

Eleanor Gibson: Was there a lot of preservation involved?

David Gauld: A lot had to be approved by the historic preservation but they approved it without too much debate.

Eleanor Gibson: You spoke earlier about the difference between east and west in terms of preserving buildings. Is that something that you think holds the west back?

David Gauld: I think preservation has overreached, especially in Miami. We did a project here that was killed by the historic preservation before we won this competition. Isozaki had designed a beautiful building for a site on Ocean Drive, but they wanted it to be more like the other buildings on Ocean Drive and they didn't agree with us.

They wouldn't let us do a building that is half the size of what they ended up with. That's a case where historic preservation overreached and ended up with something worse.

Eleanor Gibson: Is that a particular problem in Miami?

David Gauld: It's also in New York, although I think the landmarks commission in New York is getting more flexible. In a way I think even the Japanese attitude is also not in balance. They tore down the Okora Hotel and Frank Lloyd Wright's Imperial Hotel.

There's another interesting project in Japan in the town called Ise Jingu, it's an old temple that every 20 years they completely tear it down and then rebuild it in a second place. For 20 years it's in one place and then 20 years it's in another, it's just a strange attitude compared to the west. 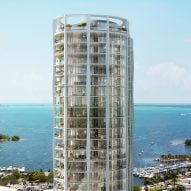