Will Scott's Architecture of the Underground photo series showcases the diverse designs of London's Tube stations, from the art deco of Arnos Grove to the high-tech of Canary Wharf.

Scott, who splits his time between London and Edinburgh, had the idea for the images after he made a chance visit to Arnos Grove station two years ago, and became fascinated by the building's design.

The photographer soon realised he had seen very little of the London Underground network, and that many stations are largely undocumented.

"Many Londoners don't really have any appreciation of how incredible a design and engineering feat the underground network is," he told Dezeen.

"When you're commuting every day, it's easy to just think about it as a tool that gets you to and from work."

Scott worked his way along one tube line at a time, hoping to capture stations from a variety of eras and architectural styles.

He tried to time each shoot with a sunny day, to ensure the buildings looked at their best. He used a Canon 5DS camera with a 24-millimetre tilt-shift lens, to capture as much as possible in each shot.

Farringdon, which first opened in 1863, features white tiling on its facade and a green marble band running around its base, while a cavernous concrete and steel hall lies at the centre of Canada Water, a more contemporary station built by Buro Happold in 1999.

The photographer made a point of venturing to the peripheral tube stops that sit far outside of London's centre, taking particular interest in the buildings designed by Charles Holden at the northern end of the Piccadilly line.

Among these is Southgate, which is topped by a flattened, cylindrical roof, and Cockfosters, which is illuminated by slanted windows and globular lights suspended from the ceiling.

"I'm really hoping to show some of the lesser known stations off, as many of them were groundbreaking for their time," Scott explained.

The photo series also hones in on the design details both inside and outside the stations, such as the typography used for signage and the tiled illustrations applied to platform walls.

"I love the level of detail that went into both the individual stations and the overall network, it was an incredible labour of love," said Scott.

Will Scott uses film as well as photography to document his interest in the built environment, posting his latest findings on Instagram.

He is not the first photographer to take an interest in railway stations and networks. Alastair Philip Wiper documented construction of Copenhagen's new metro line, while Christopher Forsyth embarked on a project to document all of Montreal's metro stations. 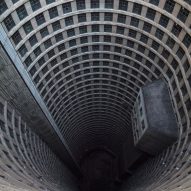