Graduate students at Yale University have completed a prefabricated building in New Haven with two apartments that will be leased to tenants who are experiencing homelessness.

The 1,000-square-foot (92-square-metre) house was built on a slender vacant lot on Adeline Street, in the city's Upper Hill neighbourhood. The building is clad in white-stained cedar and is topped with a sharply gabled roof. Protruding window boxes gesture toward the neighbourhood, and "balance the needs of openness and privacy".

Rectangular in plan, the building contains a ground-floor studio and a two-bedroom unit that occupies both the ground and second floors. The interior features light-filled rooms with high ceilings, concrete and wood flooring and built-in wooden storage. Many of the plywood bay windows are deep enough to sit in.

The front of the home is lined with an elongated planter box filled with foliage. A small flight of steps lead to a central breezeway, which sits between the two apartments.

The building was designed by students in the Jim Vlock First Year Building Project, a programme established in 1967. The course involves designing and building low-cost homes in New Haven, the city where Yale is located. First-year architecture students are required to participate in the programme as part of the school's curriculum.

This year's house marks the 50th project completed by the programme. Work by past groups includes a cedar-clad home in the city's West River district.

"It is our belief that architects and designers have an important role to play in addressing many of the most vexing issues of our time, including the shortage of affordable housing and making our cities more inclusive," said Deborah Berke, dean of the Yale School of Architecture. "I hope that this project will help further the dialogue around these issues in New Haven."

This year's dwelling is the first home built as part of a five-year partnership with Columbus House, a local nonprofit organisation that serves the homeless. The charity will select two tenants for the home – a single occupant for the studio, and a small family for the two-bedroom unit. The organisation will help cover a portion of the rent, with the rest being paid by the tenants.

"The goal of Columbus House is to end homelessness, and we do that by getting people housed," says Alison Cunningham, who leads the organisation. "Every unit that we add toward the affordable housing stock in New Haven helps us come closer to that goal.

Students were charged with designing a "cost-efficient, flexible design that tackles replicability in material, means and method of construction", according to the programme's website. The work began last spring, when students were divided into teams that were each charged with presenting a final proposal. One design was ultimately chosen, and construction began during the summer.

Most of the building was constructed using prefabricated elements, including exterior and interior walls, roof panels, floor assemblies and bay windows, which were made in a warehouse on Yale's West Campus.

"Prefabrication places a higher premium on planning, and students had to work down to the level of nails and fasteners to address issues that could normally be dealt with in the process of building," the school said.

The First Year Building Project was started by Charles W Moore, the architecture school's dean from 1965 to 1971, in collaboration with faculty member Kent Bloomer. In 2009, it was renamed after area resident Jim Vlock, who sponsors the programme.

Photography is by Haylie Chan and Zelig Fok. 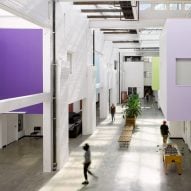 LGA transforms warehouse into community for homeless youths in Toronto