A new digital billboard in London's Piccadilly Circus uses recognition technology to display targeted advertisements based on the make of passing cars, and the gender and age of pedestrians.

The screen wraps around the facades of buildings overlooking the popular tourist destination, and replaces six separate screens that previously formed the advertisement display.

Built-in cameras concealed within the screen can track the make, model and colour of passing cars to deliver targeted adverts, said Landsec, the company that owns the billboard named Piccadilly Lights.

Brands are able to pre-programme specific adverts to play when particular cars drive past, and adapt to the age or gender of passersby.

The cameras and an algorithm register visual cues – for instance, hair length and height – to make assumptions on the demographics of the area. For example, if the algorithm detects a higher proportion of women in the area it could display promotions for womenswear. 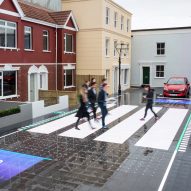 Umbrellium develops interactive road crossing that only appears when needed

The technology can also be used to respond to changes in the weather, news, sports reports and social media updates.

Local Wi-Fi means that people can engage with the brands shown on the screen using social media platforms. This can then be used by the brands to project adverts that best represent the interests of people in the area.

"The new screen technology includes visual sensors that can detect certain elements of the surrounding area, with the potential to then adapt the content in response to it," Landsec told Dezeen.

"Although the Piccadilly Lights screen will be able to display advertising content that responds to real-time factors – such as the weather or the colour of cars – the technology is not able to recognise individual people or display individually targeted content."

Unlike the old display, which was made up of six slightly separated panels, the new single screen means a single advert can be stretched across its entire surface. But there is still the option to electronically divide the screen to display multiple adverts at once.

Piccadilly Circus is one of London's busiest intersections, with an estimated 100 million people passing through it each year, making it a prime advertising space for businesses. 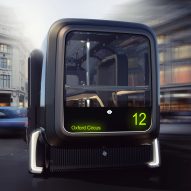 The advertising screen was initially introduced to the site in 1908 and later replaced by digital projectors in 1998.

The most recent opening follows a period of renovation where the screens were inactive for nine months.

"The Piccadilly Lights have been one of London's icons for over a century, and are an unmissable sight for the hundred million people who pass through Piccadilly Circus every year," said Landsec's portfolio director, Vasiliki Arvaniti.

An increase in the use of recognition technology in public spaces, such as the installation of three digital interactive screens in Birmingham's Grand Central Station in 2015, has prompted a number of architects and designers to explore the phenomena.