Removing interior walls and expanding the roofline of this bungalow in Austin, Texas, allowed Murray Legge Architecture to create a light-filled living space for a local newspaper editor and her family.

The interior renovation of Skyview was completed in 2015 for the editor-in-chief of the Texas Tribune, Emily Ramshaw, and her filmmaker husband David Hartstein.

They wanted to combine kitchen, living and dining functions into an open-concept living space at the centre of their home. Previously, these rooms were all separate.

"This typical Austin 1940s bungalow was strategically remodelled to transform an awkward arrangement of dark, low-ceilinged rooms into a single continuous space with kitchen, dining, and living areas," according to Murray Legge Architecture.

Opening up these spaces had an important impact on the general layout of the 1,300-square-foot (120-square-metre) home, since visitors enter directly into the main social space.

To give the room a loftier feeling, the architects expanded the previously pitched roof to form a flat plane. Exposed wooden structural joists were left bare, drawing the eye upwards.

"Stick frame construction is the most common building system used in residential construction, and its inherent beauty and elegance is often hidden, buried underneath sheetrock and other finish materials," said the architects.

"For this project we wanted to reveal and work with the stick framing as a finished product and to allow it to shape the character of the interior space."

New clerestory windows bring in a consistent, even light throughout the day, and sliding glass walls at the back of the home open out onto the yard. Another tall, narrow window was added to the street-facing side of the property.

This feature hints at the renovation while protecting the integrity of the front facade. "The couple was determined to maintain the modest and understated character of the Austin streetscape while being able to create an open and contemporary interior," Murray Legge Architecture said.

In addition to the functional kitchen layout and open living space, the architects also included ample storage along the side walls. Custom cabinetry is used to fit books, plants, and a television.

Murray Legge has also completed a pool house that uses surrounding trees as structural supports for a broad canopy. Recent renovation projects in the state of Texas range from a concrete bungalow that was expanded into a three-bedroom home and guesthouse to a hotel in Austin that uses an existing stone building to provide an affordable alternative to the city's many boutique hotels.

Photography is by Whit Preston. 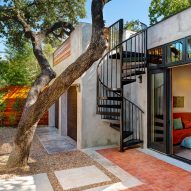