Striking green, blue and copper accents create focal points within this otherwise monochromatic apartment in Tel Aviv, Israel, which is set within a 1930s Bauhaus building.

The apartment is the home of local architects Amir and Chen Navon, who joined forces with interior designers Lital Ophir and Ilana Bronfen to carry out its renovation.

While the couple oversaw the project's structural changes, Ophir and Bronfen took charge of the aesthetics. They were briefed to create a contemporary space with fittings and furnishings that complimented the the building's Bauhaus history.

"While acknowledging the importance of honouring the 1930s Bauhaus architecture, we wanted to keep its classic European heritage as well," Ophir and Bronfen told Dezeen.

"The apartment had no chic, no character."

Importance was also placed on exposing the 97-square-metre apartment to natural light – a poor renovation by former tenants had left rooms with a "sense of heaviness", and restricted views to the outdoors.

To begin, several partitions were removed to create an open-plan living and dining area.

Ophir and Bronfen then went about adding "islands" of freestanding furnishings, such as a dining table and Carrera marble-topped breakfast bar, to form clear paths of circulation.

The pair particularly wanted the inhabitants to be guided towards the 11-metre long balcony that wraps around the apartment's facade.

"We decided to create a clean and airy space that contains a series of freestanding elements so they do not hurt its wholeness," they explained.

"This led us to implement the conceptual notion of 'islands', which stand alone and float, throughout the apartment."

All of the walls have been painted stone-white, and paired with herringbone-patterned oak flooring.

Splashes of colour are provided by a sea-green storage cabinet, which conceals a refrigerator, tableware and food supplies. A deep-blue sofa from B&B Italia also sits at the room's centre, next to a patterned rug by Doshi Levien which features similar bold shades.

A full-height glazed wall with white gridded framing divides the kitchen from a toy room for Amir and Chen's young son and daughter.

The children's bedroom, which only measures at 10-square-metres, has been fitted with a two-person sleeping niche with built-in drawers to maximise space for play.

The master bedroom, which is also whitewashed, features a geometric print headboard and copper lighting fixtures that add touches of warmth.

Its en-suite bathroom is housed behind a glass box, with an adjoining curtain that can be drawn across for privacy.

Israel is home to some of the best-preserved Bauhaus architecture in the world – the movement inspired the construction of over 4,000 buildings in Tel Aviv between 1920 and 1940.

Created by German-Jewish architects who immigrated after the rise of the Nazis, based their new architecture for the city on teachings from the renowned Bauhaus art school, which operated between 1919 and 1933.

Recently Amir Navon, who also leads Tel Aviv studio 6B Architects, teamed up with interior designer Maayan Zusman to overhaul another of the city's Bauhaus apartments, employing pale colours and transparent walls to give the illusion of extra floor space. 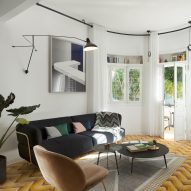 Bauhaus apartment in Tel Aviv renovated to highlight its history