Brightly coloured circulation spaces contrast with the slick metal exterior of this data centre in Amsterdam, which Benthem Crouwel Architects designed as a more attractive take on high-security infrastructural architecture.

The new AM4 tower was developed by local studio Benthem Crouwel Architects to slot in alongside the smaller AM3 data centre, which it completed in 2012 for global networks specialist Equinix.

The original building features facades wrapped in horizontal metal lamellae and is linked to the new tower by bridges.

The centres are located at the Amsterdam Science Park – an academic campus where around 38 per cent of all Dutch data traffic is processed.

The AM4 building contains 12 storeys of servers in a 72-metre-tall tower that is clearly visible from the city's A10 ring road.

Benthem Crouwel Architects believes that there is a stigma associated with the architecture of data-processing facilities, which are typically housed in anonymous boxes in industrial suburbs.

The firm sought to improve the connection between the new building and its context by implementing a design that feels secure yet approachable.

"The buildings have to fit in with their surroundings," said architect Joost Vos. "They must be attractive, however not too welcoming."

"We all want our personal data to be safe, but we feel awkward about large data centres in our cities, because we don't want fortress-like buildings surrounded by high-security fences in public spaces."

The first step the firm took to prevent the centre from feeling too oppressive was to dig a moat-like canal rather than using barbed wire or more standard security measures.

Bridges across the canal lead to the two data centres and to a dedicated welcome area where visitors and staff go through identity checks in a light-filled lobby.

Full-height windows lining the lobby on two sides allow a visual connection to the water and the rest of the campus, while a section of the opposite wall is clad in punchy red panels.

The colourful interventions continue as visitors cross a bright-red bridge that signals the passage towards the high-security "white spaces" housing the servers.

"It is a totally different experience from being in a converted warehouse, the type of building mostly used for data centres," said the architects.

"The exterior is grand, clean and cool: it resembles a large hard disk, with horizontal slants passing the air from the cooling system."

The tower is clad in triangular aluminium profiles, which are black on one side and silver on the other. The vertical metal surfaces become thinner as they extend upwards, creating an optical illusion that causes the building to appear slimmer.

The ethereal effects created by the reflective cladding, which tapers as it meets the sky, are intended to represent the intangible nature of data and cloud services that are so important to modern society.

Heat generated by equipment within the data centre is stored and used by other buildings within the science park.

The building is also designed to be easily scaled down in the future if the servers it houses are miniaturised in line with many evolving technologies.

Benthem Crouwel Architects has offices in Amsterdam and Düsseldorf and works on projects ranging from public buildings to infrastructural projects and urban masterplans.

The firm's previous infrastructure work has included a multipurpose car park in Amsterdam featuring a pair of huge helix-shaped ramps and the redevelopment of The Hague's main railway station, which is topped with a diamond-patterned glass roof.

Photography is by Jannes Linders. 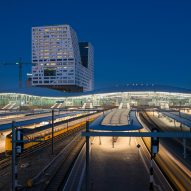