In this movie, designer Alice Lund explains the concept behind The Ned, a club, hotel and dining venue in a converted London bank, which was named hotel of the year at the AHEAD Europe awards last night.

Private members club Soho House was behind the huge project, which takes over the former headquarters of Midlands Bank in the City of London.

It opened earlier this year, and has just picked up the Hotel of the Year prize at the AHEAD Europe awards, which celebrate the best hospitality architecture and interiors from across the continent. It was also a winner in the Spa and Wellness, Restaurant, and Events Spaces categories.

The Grade-I-listed building was designed in 1924 by celebrated British architect Edwin Lutyens, and completed in 1939.

According to Lund, one of Soho House's in-house designers, the aim was to create an interior that felt historic rather than new.

"The brief was to create a beautiful old hotel as if it had been around since the inception of the building itself," says Lund in the movie, which was filmed by Dezeen for AHEAD. "So very opulent, very beautiful, but also slightly faded around the edges."

"We drew a lot of inspiration from the building," she continues. "You could come here hundreds of times and still be finding new beautiful details."

Soho House worked with partner Sydell Group on the project. Its location, in London's financial centre, was an unusual move for a brand whose target market had previously been creative professionals.

With 252 rooms, it is by far the brand's largest project to date – followed by Soho House in Berlin, which has just 100 bedrooms.

The ground floor of the hotel is the former banking hall, and plays host to nine restaurants. "The ground floor looks fairly similar to how it looked when it was a vacant building," claims Lund. "It was listed, so all the columns, all the banking hall counters, they had to stay in place, so that's what defined the layout of the ground floor itself."

The event spaces on the sixth floor are housed in former luncheon rooms for the director and chairman of the Midlands Bank.

"The sense of scale on that floor is incredible," says Lund. "It has this incredible mahogany panelling, and then higher up it has this beautiful tapestry that runs around the perimeter of the room."

"On the fifth floor there are some particularly beautiful rooms," claims Lund. "They were managers' offices originally. They're now called the heritage suites. You have all the existing panelling, and cornicing and details from when it was a bank as well."

The Ned's subterranean spa revolves around a marble-clad pool inspired by Victorian baths.

"We have a lovely pink hammam, it's very opulent and oversized" says Lund. "There are also a number of Cowshed treatment rooms where you can get a massage. They were designed to be very comfortable but also very in keeping with the period."

The award-nominated bar in the basement of the building is situated in what used to be the main vault of the bank, and retains many unusual features from its original use.

"You enter through a huge circular door with the biggest hinges I've ever seen in my life," says Lund.

Two rooms of the bar occupy a space that once housed the bank's safety deposit boxes. "There are about 3,600 boxes lining the two spaces. You can pull out the little trays – in fact, we use those as cocktail poseur tables."

"When I walk into the building I still get a huge sense of awe that hasn't dissipated over time," Lund adds. "The scale is spectacular, the architecture is phenomenal, and when you're in here you do feel like you're almost in a different time."

"It's a real hideaway from real life, and I think there's a really nice sense of escapism that you get here." 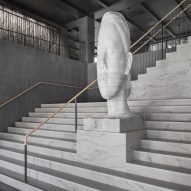 This movie was filmed by Dezeen for AHEAD in London. Photography is courtesy of The Ned.