French designer Mathieu Lehanneur created the store interior inside a brownstone building at 248 Lafayette Street in Soho, after the brand moved from its location close to Madison Square Park.

The new 1,400-square-foot space showcases and sells items from cult-favourite Maison Kitsuné, which produces both apparel and music.

Sharing a love of both cultural aspects, founders Gildas Loaëc, Masaya Kuroki and London-based design company Åbäke set up the brand in Paris in 2002.

"The story of Maison Kitsuné is a story of links: the links between France and Japan and those between fashion and music," said Lehanneur.

His design revolves around a series of iridescent and reflective metallic tubes, which snake around the store to form garment rails, furniture stands and lighting fixtures.

The bichromated steel pipes curve around the white-painted room, reaching up to the high ceilings, and disappearing into heavy cylindrical blocks and textured concrete floor.

Lehanneur described the installation as a "magic pencil, drawing its own line within the space".

Mirrors cover a full wall at the back of the store, while wood panels feature sections of opaque film between their frames that create the illusion of a lush courtyard outside.

During his career, Lehanneur has created a variety of interiors, electronic products, lighting designs and sculptural art pieces.

For a recent series of objects, he carved marble surfaces to look like rippling water frozen in time, while last year he renovated a cafe inside the Louvre museum in Paris. 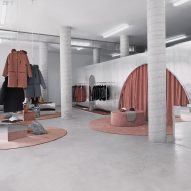