Minimal fashion brand The Arrivals has opened pop-up stores in New York, Los Angeles and San Francisco, where designers Bower and Lotte Van Velzen have used metallic and russet surfaces to match the colour palette of this season's collection.

Volcanic rocks, metal sheeting and mirrored stands are combined at the spaces showcasing the latest apparel by The Arrivals, which describes its line as "architecturally inspired outwear and accessories at a fair price".

Bower and Lotte Van Velzen – both based in New York – were behind the spatial design of all three shops.

"When designing the concept for the three stores, we wanted to create a minimal, somewhat alien environment in which the materials, finishes and colour palette created a sharp contrast within the space, while remaining cohesive," said Bower co-director Jeffrey Renz.

"The volcanic lava rocks, seemingly from another planet, mixed with the slick reflective surfaces of the mirrors and display pieces that resemble a liquid form, are a good example of this."

The largest of the pop-up trio is in New York's Soho, and takes up a 3,000-square-foot space with exposed concrete columns and flooring.

Dividing the room and hiding the back-of-house area, a corrugated aluminium screen runs from one end to the other.

In its centre, a cut-out semicircle is filled with a russet curtain, and the shape is mirrored in carpet on the floor in front.

On the left of the arch, a clothing rail sits on a bed of reddish Arizona lava stone nuggets. To the right, a cashier's desk is fully covered in mirrored acrylic panels, with the brand's name spelled out in neon above.

Circles of the rusty-coloured carpet form pads in the minimally furnished space. They carry smaller reflective boxes for displaying accessories on, next to large chunks of grey rock.

Coats from The Arrivals' range are hung above from the ceiling, suspended on white cords at different heights and aligned with the store's windows. Bower's graphic mirrors can be seen leant up against the walls.

The temporary stores in LA's Melrose neighbourhood and San Francisco's Mission District are smaller. They both feature the same material palette, but have different accent colours to accentuate The Arrivals' Autumn Winter 2017 hues.

While the New York pop-up is focussed around the dusty-nude shade called Mars, LA's is based around a deep rusty Crimson and San Francisco's draws attention to an oil-slick green named Petrol.

All three spaces opened to the public in October 2017. Photography is by Albert Ryan. 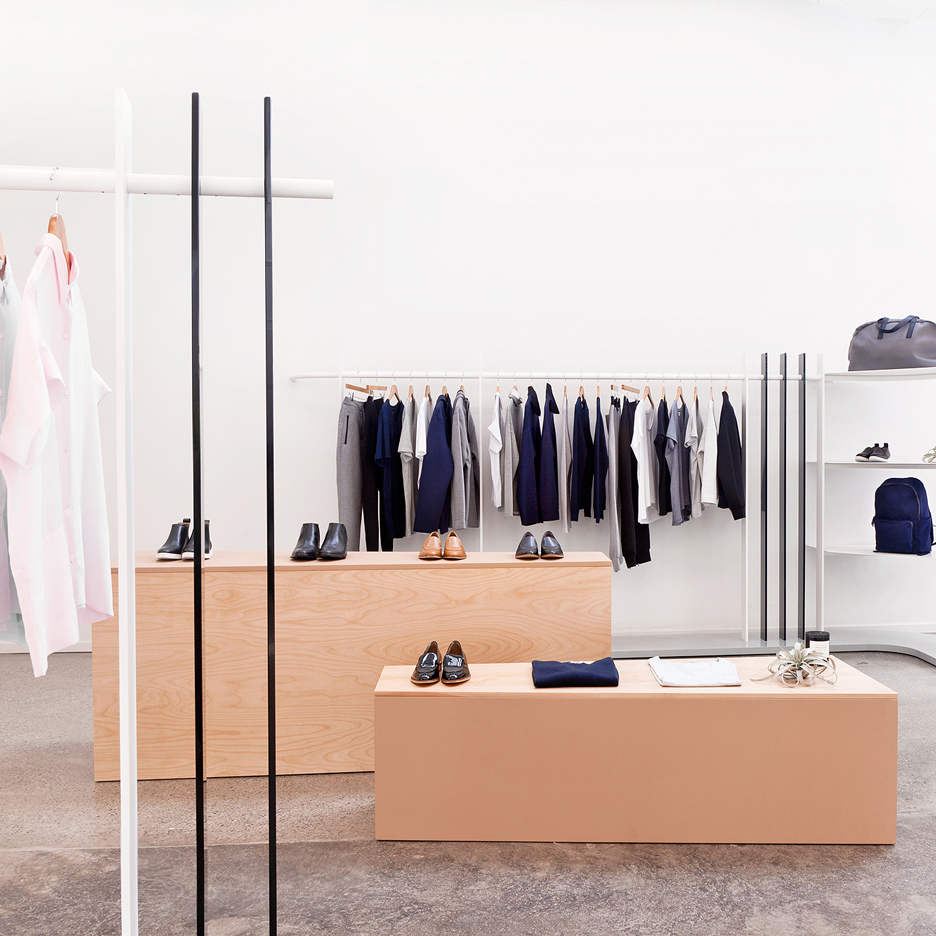