The studio, which is led by architect Piers Gough, will create the 68-storey building as part of a major regeneration project in the south London borough.

Named One Lansdowne Road, it will occupy a plot at the corner of Lansdowne Road and Wellesley Road, between the East and West Croydon train stations.

It was granted planning permission in September 2017 and has now been signed off by London mayor Sadiq Khan, paving the way for construction to start in early 2018.

The building will feature a pair of towers, rising up from a shared 45-metre-high podium. The West Tower will top out at 140 metres, while the East Tower will reach 228 metres – making it one of the tallest buildings in the UK.

A public viewing gallery set 213 metres up, as well as an elevated restaurant and bar, will offer views over Croydon.

"The proposed development is sited within the Central Croydon site, where tall buildings are being encouraged to lessen the visual impact," said CZWG.

"The proposed building is a spectacularly tall landmark denoting the centre of Croydon from a distance and its important location in the townscape closer to."

Bronze waves will coil from the podium and stretch up to the top of each tower, carving a relief pattern in the glazed facades of the design. The pattern, designed to unify the separate elements of the scheme, is based on the work of French artist Henri Matisse.

"The relief elements project above the parapets of the rectilinear form of the towers to create a dramatic silhouette, invoking the heyday of the celebratory skyscraper."

One Lansdowne Road will contain 794 apartments and 35,000 square metres of office space on its upper storeys, while shops, restaurants and leisure facilities will be located within the podium.

Designed on behalf of developer Guildhouse Rosepride, it is one of many new buildings proposed in Croydon, as part of the £5.25 billion redevelopment programme. Over the next 20 years, the project is expected to deliver 7,300 new homes and 95,000 square metres of commercial space.

The 41-storey West Tower is intended to relate to the height of a new £1.4 billion Westfield shopping centre, which received planning approval last week. 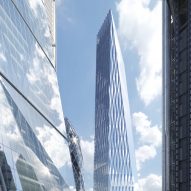