Design Academy Eindhoven graduate Mark Henning has created an experimental toolkit for testing and training the perfect handshake, which he imagines being used in an immigration office.

Henning's project, called Normaal, seeks to highlight how "abnormal" behaviour – which could be something as simple as an unfamiliar social gesture – can lead to suspicion and fear, particularly in societies where nationalism is on the rise.

To demonstrate this, he has created a table that incorporates a range of complex measurements and instruments. Using this, he is able to test whether an individual conforms to the accepted "normal".

"With the recent rise of populist politics our suspicions have become an arena for manipulation. Suspicion is often constructed in opposition to what we consider normal," explained the designer.

"The project challenges our notions of what is normal by exploring one of the most standard and socially accepted gestures we know: the handshake."

The proportions of the table and the measuring devices on its surface are all based on the size of an average Dutch person. In this way, the table becomes a tool that could hypothetically be used to both test or train someone who arrives in the country from abroad.

As well as creating the table, Henning has choreographed a short performance, during which he helps another person – presumably an outsider – to perfect the normal handshake.

"The performance is framed within the immigration processes in the Netherlands, exploring institutionalised definitions of normal, and starts to speak about a larger European context," said the designer.

He claims that, although the setup appears "absurd", it is a reflection of today's society and the conditions that many countries already impose on immigrants.

"I've condensed it to one action, one gesture, but it is essentially happening every time a migrant or a refugee enters this country," he said. "It's a stylised or simplified version of it."

The project was on show at the Design Academy Eindhoven graduate show during Dutch Design Week. It was also discussed by Jan Boelen, head of the school's social design programme, as part of Dezeen's Good Design for a Bad World talk series the same week.

Boelen was a panellist on a talk that questioned whether designers can influence politics. He described Henning's project as "a very political statement".

"It is a very interesting way of learning how that you relate to somebody else," he said.

According to Boelen, this project is one of "10,000 little steps, and little solutions, and little questions" that could be used to trigger real change.

"Maybe it's more important today to question situations, to understand them, to unveil them, to unmake them, to unlearn, rather than to try to solve big problems. We have to embrace the issues, and by embracing them, we can maybe solve them in another way," he said.

Henning doesn't intend for the project to be rolled out in any way – he sees the project as merely a starting point for a wider conversation about "assimilation, shared values and dominant cultures".

"One thing I've noticed is that the project has attracted immense interest from the Dutch public," he told Dezeen. "It's very topical right now."

"It's about raising awareness and starting a conversation."

Dezeen hosted five Good Design for a Bad World talks during Dutch Design Week 2017, covering topics including the refugee crisis and climate change. All of these talks are available to watch in full, although edited versions of all five will also be published over the coming weeks.

Photography is by Yen-An Chen, unless otherwise indicated. 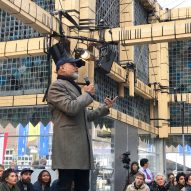