Dezeen promotion: Cecilie Manz has been named Designer of the Year for Maison&Objet's January 2018 edition, and will present her body of work in a self-designed space at the fair in Paris.

The Scandinavian designer, who is based in Denmark, has been awarded the title for the next edition of the French furniture fair – set to take place from January 19 to 23 2018.

Described by fair organisers as an "advocate of warm minimalism", Manz has become known for her ability to create colourful pieces that are in keeping with the stripped-back Scandinavian style.

"More than a style, the Scandinavian approach she defends – which is too often distorted in her opinion – 'should reflect the actual lifestyle of these countries'", said Maison&Objet. "In her work, this is often achieved through subtle play on shades of grey associated with brighter colours."

"Colour is a fundamental element in her creative process and she always develops a specific palette in the earliest stages of each project, because it is a way to assert the product's identity," the organisers continued.

"Her Scandinavian heritage is also self-evident in her effort to strip her creations of any superfluous element, focusing on the essential, oblivious to the fact that her ceaseless pursuit of uncluttered lines presents a new challenge every time."

Manz graduated from the Royal Danish Academy of Fine Arts in 1997, before moving to Finland to continue her studies at the University of Art and Design in Helsinki.

She founded her own studio in Copenhagen after that, and has gone on to create products for a number of high-profile brands.

Manz's work with furniture brand Rud Rasmussen saw her create a canvas and wood version of a hotel mini-bar, while a partnership with Danish brand Menu resulted in a trestle table held together by strips of leather.

She was also among a group of designers to take part in an exhibition curated by GamFratesi at Milan design week in 2015, which saw 14 designers and artists present pieces inside black metal cages on top of a mirrored floor.

Maison&Objet names a designer of the year for both the January and September fairs.

They are typically in keeping with the specific focuses each of the two shows – a product or industrial designer for January, and a designer more recognised for their work in interiors for September.

At the fair, the chosen designer showcases their work in a space entirely designed by and dedicated to them.

The most recent recipient was interior architect Tristan Auer, who was awarded the accolade thanks to his "elegance and French style". 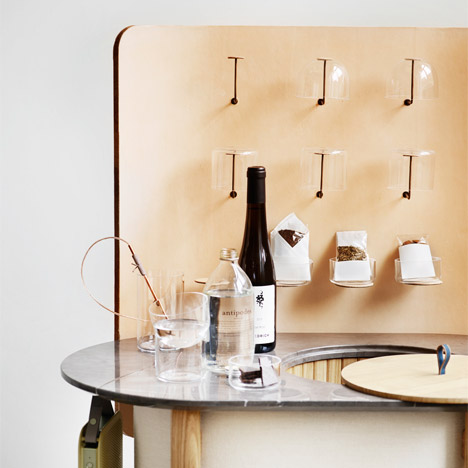