Seoul-based studio Orijeen has designed a collection of colourful furniture, which appears to change shades depending on the viewing angle.

Orijeen's two-piece Colour Flow collection features a wardrobe and a small cabinet, both with rounded edges.

While the wardrobe is patterned with colour-changing hues ranging from yellow to blue, the small cabinet alternates from pink-tones to blue.

This effect is created by a lenticular surface, which consists of a translucent plastic sheet containing a set of small, convex lenses on one side, and a flat surface on the other.

These convex lenses create the illusion of depth on a two-dimensional surface, and make the furniture appear to change colour depending on the angle from which it is viewed.

By creating the illusion of colour-changing surfaces, the studio hopes to remind people of their connection to objects.

"As technology advances, the concept of interaction has become common and important in many fields. I thought it would be possible for this to be applied to furniture, and I wanted it to be made in a natural and simple way," Jeen Seo of Orijeen told Dezeen.

"By changing colour depending on the user's position and movement, he or she is able to immediately realise the connection between them. This recognition might help people more actively and joyfully experience the objects, and communicate with them," he added.

Lenticular printing is a technique normally used in advertising. Recently, it was also used by London studio Raw Edges to create a range of rugs patterned with a floral design that appeared differently depending on the viewing angle. 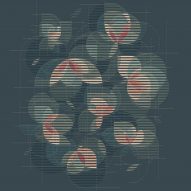