Dezeen is giving away two copies of Bittersweet: Noma Bar – a limited-edition set of books by Israeli illustrator Noma Bar, which also includes a signed print.

This competition is now closed. Congratulations to the winners, which are Claire Mudie from Isle of Man, UK, and Chris​ ​Thornley​ from Clatt, UK.

Dan​ ​Norman from London, UK; Ward​ ​Swennen​ from Peer, Belgium; and Jannick Pihl​ ​Rasmussen from Berlin, Germany have also won a copy of the trade version of the book.

Two readers will each win a copy of Noma Bar's retrospective, comprising five hard-back books, a slipcase and an exclusive signed piece.

Dezeen is also offering three readers the chance to win a paperback version of the set, which publisher Thames & Hudson has condensed into a single volume.

Israeli-born Bar, who is now based in London, handpicked a selection of his colourful and deceptively simple illustrations to create Bittersweet: Noma Bar.

Each of the five volumes explores a different theme. Pretty Ugly focuses on portraits, In Out addresses sex, while Life Death explores conflict.

"His use of negative space and minimalist forms creates images with multiple readings that can delight and shock in equal measure," said Thames & Hudson.

"Each of Bar's illustrations tells a story that is hidden in the details, with the message revealing itself as you look more closely."

To provide readers with more insight into his work, Bar has written descriptions of each project, to explain his methodology.

"As a collection, the whole is much greater than the sum of these many-layered parts, destined to become a must-have for all followers of visual and popular culture," said Thames & Hudson.

Highlights include the giant stamp he created for a London gallery.

Among Noma Bar's other well-known projects are book covers for Don DeLillo and Haruki Murakami, and artwork for a wide range of magazines. He has also created illustrations for Chineasy – a project designed to help people learn to read Chinese characters.

Two winners will each win a copy of the limited-edition Bittersweet: Noma Bar, including the signed print. The set is also available to purchase for £200 from Thames & Hudson.

Three more winners will receive a copy of the trade version, priced at £29.95. 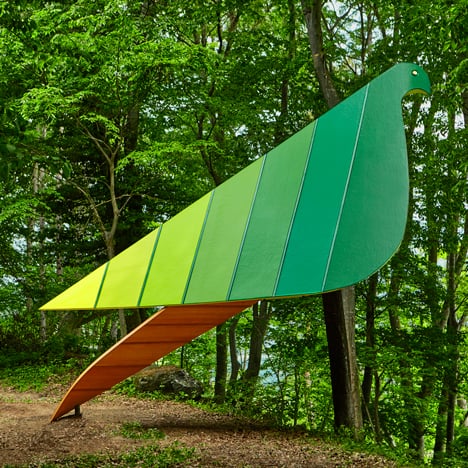