Israeli illustrator Noma Bar has created a wooden pavilion shaped like a bird with a leafy back among the trees of a wood in central Japan (+ slideshow).

Bar was commissioned by the Momofuku Ando cultural foundation – named after its founder, a 20th-century inventor who was one of the creators of instant noodles – to design the timber lookout at the highest point of a woodland area in Komoro, Nagano Prefecture.

The structure is one of a series of unique pavilions commissioned for the Tree House project, an initiative set up in the area around the Kengo Kuma-designed Momofuku Ando nature centre. The illustrator is the only non-Japanese designer to have contributed to the project thus far.

Reaching nine metres in height, the Birds Eye View pavilion takes the form of a sitting bird in profile but looks like a giant folded leaf from the back.

"For the illustrator it was important to retain the visual storytelling of his work, an architectural form translated into the environment," said a statement from Agent Hamyak, the company that manages the artist.

The section that forms the bird's tail incorporates a set of steps within an angled structure similar to a canoe.

The roof is striped with different tones of yellow and green, adding to its leaf-like appearance, and provides a shelter for the small platform at the top of the stairs. 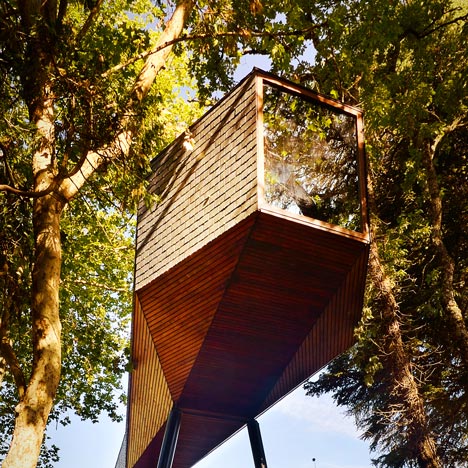 Visitors who climb up are presented with views over the woods towards Mount Asama – an active volcano in the centre of Japan's main Honshū island.

"As illustration expands into a wider field of practice, the project allowed Bar to explore ideas on a larger scale, to create an immersive object that the public can interact with physically and to gain play from," said Agent Hamyak.

A team of 20 Japanese carpenters built the small structure, which is supported by the stump of a cherry blossom tree beneath the platform and anchored by another vertical element at the base of the stairs.

The Tree House project now includes seven structures, including Nendo's enormous woodland nesting box with 78 entrances for birds on one side and one big door for humans on the other.

London-based Bar, who was born in Israel, combines art, illustration and graphic design in his work, and is known for his colourful and deceptively simple images and portraits, which often incorporate silhouettes of everyday objects and logos.

Among his best-known designs are book covers for Don DeLillo and Haruki Murakami, and he has also created art for a wide range of magazines.

He recently provided illustrations for the Chineasy book – pairing simple pictures with Chinese characters to help those learning the language to remember the complex symbols.