"Truss Me", "Eames it in" and "Get an Eiffel" are just some of the sexual positions listed in a new architecture- and design-themed take on the Kama Sutra, the ancient Indian Hindu guide to love and sex.

The positions detailed in the book are all inspired by iconic buildings and often incorporate the use of designer furniture.

Bolivar, who works at an architectural practice in London and has been working on the book as a side project over the last two years, says that The Archisutra raises the question: how should we design for sex?

"The idea to produce the book came about after overhearing a colleague's consultation with a client about the design of his house," Miguel Bolivar told Dezeen.

"To my surprise, she blushed at the client's request to fit a lock on the bedroom door and the thought of people having sex in a building which she had designed. Her awkwardness made me think about how often sex is considered when an architect designs a building and inspired me to write a tongue in cheek book highlighting this."

Bolivar says that the book's precise annotated drawings were inspired by the work of Leonardo da Vinci and Le Corbusier.

In particular, da Vinci's Vitruvian Man – a diagram showing the proportions of the perfect male form based on the writings of Vitruvius in 400AD; and Le Corbusier's standard model of the human form, The Modulor, which was a development of Vitruvius' work.

The Modulor was used by Le Corbusier to determine the correct amount of living space needed for residents in his buildings.

"The Archisutra follows on from the work of Vitruvius, da Vinci and Le Corbusier and pushes the idea that buildings should be designed around human life," explained Bolivar.

Bolivar isn't the first architect to make the link between architecture and the Karma Sutra. In 2015 architectural illustrator Federico Babina created his own version of the Kama Sutra, where buildings rather than people demonstrate sexual positions.

Also named Archisutra, Babina's series of poster prints each feature pairs of buildings that appear to be engaging in sexual intercourse. 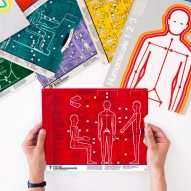