Slovakian studio Endorphine has completed a pair of houses at a golf resort near the village of Hrubá Borša, featuring living units that are combined either horizontally or vertically to create different layouts.

The four founding partners of Bratislava-based Endorphine purchased two plots on the Green Resort Golf Estate to give them an opportunity to develop a speculative project that showcases their architectural approach.

The 3X3 Houses are designed as compact dwellings that offer practical and versatile accommodation within a minimal floor area formed by combining three simple living blocks.

"The aim was to create comfortable minimal ergonomic accommodation," architect Tomáš Dupkala told Dezeen. "The houses provide the minimum that future residents need to enjoy living there, whilst needing as little care as possible."

The buildings are situated on the edge of a lake on the resort, which was established in 2009 around 25 kilometres from the Slovakian capital.

Endorphine designed the buildings to support a variety of potential use scenarios, such as ownership by young couples, retirees or buy-to-let landlords.

Each property comprises three blocks that are designated specific functions and are arranged in different formations based on the dimensions of the plot and the available views.

The single-storey residence occupies a plot measuring 450 square metres, so its three interconnected living blocks are staggered horizontally around a sequence of decked patios.

The other plot is just 360 square metres, which prompted the architects to stack the volumes vertically to make the most of the available space and provide enhanced views of the golf course.

"The composition of three similar and simple volumes allowed a lot of creative space to produce attractive designs without compromising function," said Dupkala.

The two buildings have a similar total floor area and consistent room functions, but the different configurations lend them a distinctive character that allows prospective clients to identify more with one or the other.

"Every client is different and asks for specific qualities, such as privacy, views or comfort of movement," the architect added.

"When you mix this with situation and orientation to surroundings, the result is that the tall building is extrovert and the bungalow is introvert."

Both residences feature one block accommodating an open-plan kitchen, living and dining area, with another containing the master bedroom and a third housing utilities and a second bedroom.

The properties also each have three terraces, with the taller building's outdoor spaces accommodated at both the front and rear on alternating levels.

Black frames enclosing the terraces offer the possibility to erect a pergola or winter garden if the client wishes. At the three-storey house, the lower frames help to support the floors above.

The dark-metal structures contrast with the crisp white walls and frame views of the surroundings. They also accentuate the voids between the solid volumes containing the living spaces.

A metal staircase that spirals up through the spine of the taller house provides circulation with the smallest possible footprint. Voids, skylights and windows allow light to filter down into the various levels. 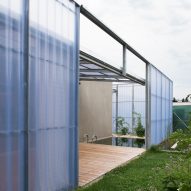