Chermayeff – a co-founder of the New York branding and graphic design firm Chermayeff & Geismar & Haviv – passed away on 2 December 2017.

The studio has created some of the most recognisable brands and logos in the US, including the rainbow-coloured peacock for television network NBC, and the blue and line-drawn globe for airline Pan Am.

The designer established the studio with partner Tom Geismar as Chermayeff & Geismar in 1957, after they graduated from Yale University in Connecticut. Sagi Haviv became the third partner in 2006.

While working as Chermayeff & Geismar, the firm created the "clean and straightforward" Franklin Gothic No 2 logotype for the Museum of Modern Art (MoMA) following its expansion in the 1960s, and Los Angeles Museum of Contemporary Art (MOCA)'s logotype in the 1980s, which comprises a square, circle and triangle in different colours.

"Ivan was a brilliant designer and illustrator, with a vibrant personal style that reflected joy, intelligence and wit," said Geismar in a statement. "He loved surprise, large-scale objects, and the colour red."

"For over 60 years, Ivan and I have enjoyed a partnership, to which we each brought complimentary talents, in an alliance cemented by shared values and mutual respect. Ivan's contribution to the field of design will remain unsurpassed."

"Ivan is a design icon, but he also was a mentor, a partner, and a friend," Haviv added. "He was obsessed with good design. And good to Ivan meant excellent — anything less than excellent wasn't even design."

"Ivan's relentless quest for the perfect relationship between form and idea is the highest inspiration anyone could hope for, and will be his lasting legacy to the industry and the people who knew him."

In 1978, the duo was awarded the Gold Medal from the American Institute of Graphic Arts (AIGA) for their contribution to graphic design. Chermayeff later spent a stint as the organisation's president.

Chermayeff was born in the UK in 1932, but spent most of his life in the US where he attended renowned establishments Harvard University, the Institute of Design in Chicago, and Yale's School of Art, graduating in 1955.

His father was the notable Russian-born British architect Serge Chermayeff, who was working with architect Erich Mendelsohn at the time of Ivan's birth, and relocated his family to the USA in 1940 when Ivan was aged eight.

Serge Chermayeff and Mendelsohn completed a number of notable modernist projects together, including the De La Warr Pavilion, a major public building in East Sussex, and a house on an historic street in London's Chelsea neighbourhood.

Although Ivan chose a decidedly different route to his father, and younger brother Peter – who also cofounded an eponymous architecture firm – he worked closely with the field. He collaborated with Chinese-American architect IM Pei on an exhibition at the Kennedy Presidential Library in Boston, and built the huge red steel "9" installed on New York's West 57th Street.

Recognition of Ivan's work included the Industrial Art Medal from the American Institute of Architects, the Yale Arts Medal, and the President's Fellow Award from the Rhode Island School of Design.

Along with his graphic design and illustration, which saw him create children's books, Ivan established himself as an artist, with his works comprising paper collages and sculptures.

"For Ivan, collage was a favourite means of personal expression apart from his professional work," said his firm. "Bright, colourful, and highly graphic, each collage is made from mailing envelopes, scraps of packaging, ticket stubs, bits of type."

Ivan Chermayeff's artwork has been showcased in 40 exhibitions across the US, Japan and Europe exhibitions with recent venues including his father's De La Warr Pavilion and Pavel Zoubok Gallery in New York.

He is survived by his four children, five grandchildren and one great-grandchild. 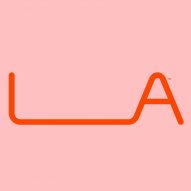