Architects and designers no longer want to associate themselves with particular styles or trends, argued Neri&Hu founder Rossana Hu during a talk with Dezeen and Dornbracht in Berlin last month.

Although architects and designers have often been associated with particular movements or stylistic approaches in the past, Hu said that today – many take an eclectic approach to their work to in order to avoid categorisation.

This has led to a lack of easily identifiable styles in contemporary architecture and interior design, the co-founder of Shanghai-based studio Neri&Hu claimed.

"Nobody wants to be labelled with any style because they want to be beyond style. 'No style' has become the biggest style," she said.

At the panel discussion, named Are Interior Trends Over?, Hu was joined by Neri&Hu co-founder Lyndon Neri and interior designer Rafael De Cardenas.

In a conversation moderated by Dezeen founder Marcus Fairs, the trio talked about the rise of eclecticism in interior design and the lack of new architectural movements emerging in recent years.

"Have we really had breakthroughs in modern architecture?" Neri asked. "It's a period wherein people are somewhat lost, and in which we really have to search ourselves, as architects."

Hu added: "Since the beginning of modernism, we really haven't gone that far. Some have tried to be more futuristic than others, but that's really just in form and not in the content that we're all looking for."

The discussion was the eighth edition in series of talks, named Dornbracht Conversations. It was hosted by Dezeen founder and editor-in-chief Marcus Fairs and Dornbracht brand director Holger Struck.

Without explicitly stating that trends are over, Hu was sceptical about the importance of them today.

"Trends are for commercial marketing. They presume that society or a group of people will want the same thing, but actually we no longer need that," she said.

"With social media, there's now a more direct way of knowing what people want and making predictions, and customisation and different ways of manufacturing can give people exactly what they want."

De Cardenas agreed with Hu that social media is having a big impact on the design and architecture industries.

"I don't think trends are over, I just think that there are more voices and more subsets of them, and I think that offers more opportunity," the Architecture At Large founder said.

"Trends used to come from the top down, but now trends come from the bottom up. It's frightening because it lacks control, but that's potentially the interesting thing about it."

The talk took place in the wake of a collaboration between Dornbracht, Neri&Hu and De Cardenas. The project aims to interpret "transitional style" – a term common in North America used to describe an approach to interior design that combines traditional and modern elements.

Hu said that Neri&Hu's work could be described as "transitional", in the sense that it bridges the gap between East and West, as well as global and local.

But she denied that the firm's work could be categorised as a strict example of transitional style.

"I would like to think that we are beyond labelling," she said. "We're more of a bridge, bridging between time and space. By time, I mean the past and the future, because we work with a lot of historic buildings and bring them towards the future."

While in agreement with Hu that "no-one likes to say they have a style," De Cardenas conceded that he probably does. 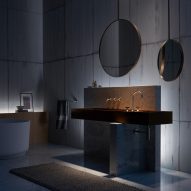 "I'm still enamoured by the first time I became aware of many things and that was in the 80s," he said. "A lot of my references come from 80s films, so there probably is a stylistic thread through that."

The talk took place on 16 November 2017 in Berlin. It is the eighth instalment of the Dornbracht Conversations series, a platform for public discourse between the disciplines of architecture, design and art. The full talk is available to watch on Dezeen or on our Facebook page.