Studies of how the brain works show that offices can only facilitate creative thinking if they offer spaces for both focused work and restorative activities, says furniture brand Haworth.

According to Haworth's research, two very different types of workplace behaviour are needed to foster innovation. One is the more concentrative mode of working, whether alone or in a group, and the other includes more restful activities, which create opportunities for insight.

By looking at how employee's brains function, researchers concluded that companies needs to provide different spaces to suit both modes of thinking, if they wants to achieve their full potential.

"Offices tend to promote only one kind of work," explained Beck Johnson, a member of Haworth's research and innovation team.

"They are either open and collaborated or highly segmented. It's about finding the right balance between those two types of spaces while also providing spaces for respite."

Haworth's researchers spoke to Dezeen as part of a series of articles produced in collaboration with the brand, which explores issues that will affect office design in the future.

The team recently released a white paper titled Optimizing the Workplace for Innovation: Using Brain Science for Smart Design, which looks at how workplaces can be designed to increase productivity.

To facilitate all four stages of cognition, an office must be designed to support all three of the brain's neural networks.

"Knowing how these networks work together helps us understand what exactly those right work habits are, and how to design for them in the workplace," reads the white paper.

Innovation requires spaces for focus, rest, and the in-between

The salience network dictates how a workplace and all its external stimuli impact the way we think and behave, including our creative work habits.

Haworth proposes that the design of the office should help the salience network prioritise creative work habits, ranging from focus to rest.

For "top-down" attention, workspaces need to limit irrelevant stimuli that divert efforts to focus, even emotions.

"Too little interest (boredom), and we won't pay attention enough to perform well," reads the report.

"You may have experienced a time when your thoughts drifted off during in a meeting. That may be due to not enough arousal. Therefore, a good motivator for focus work is confronting achievable yet, challenging tasks. It's the 'sweet spot' in terms of interest, engagement, or arousal."

According to John Scott, who co-authored the white paper with Beck Johnson, a lot of it comes down to acoustics.

"You need about 70 decibels to enhance creative performance," he told Dezeen. "Anything lower than that, say a just quiet conversation, which is about 50 decibels, and we pick up on the fact that it's too quiet." 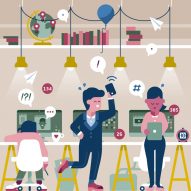 He continued: "Anything higher, above 85 decibels, which is like city traffic heard from the inside of a car, is actually too high and distracting. So there's this interesting range that is around 70 decibels that's ideal. This is why a lot of people will go to a coffee shop to work."

Focus work also requires stable and controlled spaces, with physical barriers that provide refuge from external distractions. For those that find a certain amount of "buzz" beneficial when focusing, virtual barriers in a more open area of the office, such as a "do not disturb" sign, could suffice.

Abundant natural light and views outside are proven to improve focus, as is having control over lighting and temperature.

Boredom can have a positive effect on workflow

By contrast, in the case of "bottom-up" thinking, boredom can actually have a positive affect. By stimulating the default network, it encourages imagination.

"Oftentimes, when we want to 'clear our head', we seek a different space and activity (like a walk outdoors), daydream, or do something routine," explains the paper. "When we do this, we're letting our brains noodle on potential ideas. How many ideas have come to light when you were doing something routine, like commuting to work?"

Time and spaces that promote relaxation and desired distractions from focus work are necessary. These can range from "micro-breaks", the short pauses in focus when we gaze off into the distance and daydream, to "macro-breaks", when we move to new spaces seeking individual or group respite and restoration.

The ideal restorative spaces have no barriers. They can be informal and flexible with varied stimuli, including objects/totems for inspiration. Visual access to nature and the outdoors is also beneficial.

The need for tools and sensory control in these spaces is lower. However, workers will need minimal access to tools, such as Wi-Fi, for embedding and externalising their ideas and thoughts before they are lost.

The rhythm between focusing and resting can be slow, with longer periods in each state. But peak performance occurs when this transition time is faster and workers are able to effortlessly absorb information, generate ideas, and refine them all at once.

Transitional spaces for changing modes should facilitate loitering and varied postures. They should blend the opportunity to focus with just enough varied stimuli to prompt elaboration on ideas.

In addition to independent creative thought, the paper also stresses the importance of group work. Group thinking, often regarded as brainstorming, is equally as important as group socialising.

The paper found that groups are less successful if they only partake in brainstorming sessions. Just like the individual creative processes, groups need time and space to learn collectively, to identify common knowledge across members, and to allow for connections between different pieces of knowledge.

"Protecting focus, encouraging restorative activities, and having the right tools for knowledge sharing become very important for group designated spaces," states the paper. "In addition, moving within a protected focus space and among each other leads to less territorial behaviours. This can foster trust and more knowledge sharing while in that space, which in turn improves creativity."

Lastly, the paper advises that movement should be encouraged outside the group in two ways: across other internal groups and with people external to the organisation. This movement encourages serendipitous interactions that generate knowledge sharing and learning with colleagues.

To facilitate movement and to preserve cognitive resources, navigating the workplace and workspaces within it should be intuitive and easy.

"A 2014 study by Stanford found that a person's creative output actually increased by an average of 60 per cent when walking," Scott told Dezeen. "And that was both indoors and outdoors. It can help to reset the brain and helps the default network to kick in."

Office designs must support the existing company culture to be successful

"When the office culture and environment are misaligned, that's when we get problems and conflicts," said Johnson. "You might have people that are encouraging specific types of behaviours but if they don't have the spaces to support those behaviours, that creates a tension. And vice versa; if you have a space that provides for all of these behaviours and ways of thinking but you don't have a culture then people won't be able to use it. Culture and environment are equally important. "

Office culture should promote respectful engagement, embrace diversity in knowledge and perspectives, expect frequent failures, and encourage skillful management of deadlines with an understanding that high-pressure timelines can block creativity.

Haworth found that these values may be better facilitated in organisations that have less hierarchy, or within co-working environments.

"Employees experience happiness when their workplace and workspaces convey that they are valued by their organisation and when they can focus on their work. When we are free to create and innovate, good things happen for all of us."

This is part of a series of articles produced by Dezeen in collaboration with Haworth, based on the company's white paper research documents. These documents are intended to help clients develop tailor-made office solutions in times of dramatic change.

The ideas explored in this article will be discussed in a talk at the Haworth showroom in New York today, 7 December 2017. The talk will be available to watch live on Dezeen from 6pm local time.

Illustration is by Vesa S.